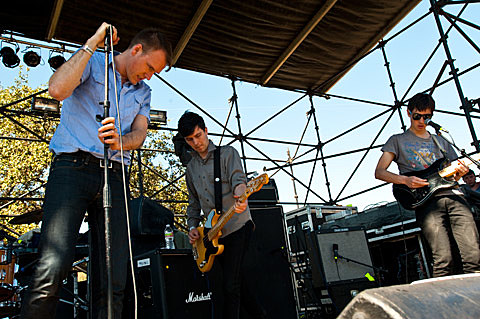 Total Control's Henge Beat was a favorite around these parts, and now the band recently released a split 12" with Thee Oh Sees. Check out a video for Total Control's "For Lease" from that split below and order your copy via Castle Face.

Total Control currently have no US dates scheduled. Thee Oh Sees, on the other hand, will spend their summer abroad and have a handful of appearances in the US. The band, who recently played Austin Psych Fest, will play a gang of festival dates including the previously discussed Pitchfork, Outside Lands, Hopscotch, ATP I'll Be Your Mirror and the sold-out Woodsist Festival in Big Sur.

In addition, the band just signed on to be a part of the Capitol Hill Block Party in Seattle WA, joining names like Neko Case, Major Lazer, Fitz And The Tantrums, Phantogram, The Lumineers, Grimes, Aesop Rock w/ Rob Sonic & DJ Big Wiz, Youth Lagoon, Diplo, Cloud Nothings, The Psychic Paramount, Twin Shadow, Dam-Funk and so many more across six-stages and as many city blocks during three days in July (7/20-7/22). Current lineup is below and tickets are on sale.

All tour dates, the Capitol Hill Block Party lineup and that "For Lease" video is below.