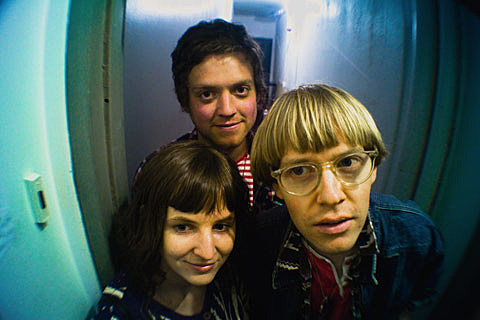 Despite what their name might lead you to believe, Total Slacker are working hard the next few weeks with the release of their debut single and a string of local dates, starting tonight (6/21) opening for Indian Jewelry and Effi Briest at Mercury Lounge. They also play the Northside Festival on Saturday night (6/26) at Death By Audio that's being hosted by Impose and also features Frankie & the Outs, Lower Dens, Coasting, Sisters and more.

Impose is also putting out Total Slacker's 7" debut in two weeks, with new versions of "Crystal Necklace" and "Video Store Rental Guy" that you may have heard in demos that made their way around the interet earlier this year. You can check out the new version of "Crystal Necklace" above -- still hazy but slightly less sludgy. And "Video Store Rental Guy" shows off the band's noise rock tendencies (well on display when they play live), nearly hitting the 12-minute mark.

There's a July 6 Record Release show at Union Pool with Beach Fossils. All other Total Slacker dates are after the jump.