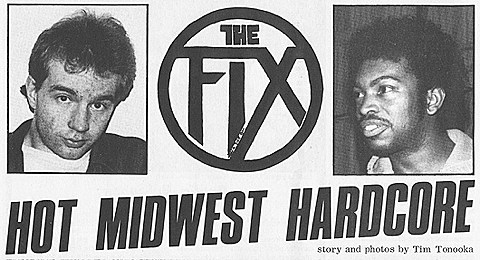 Michigan's The Fix formed in 1980 and by 1981 were the second band to sign to the now-legendary Touch & Go Records (Butthole Surfers, Big Black, Jesus Lizard). They broke up by 1982, but in their short time as a band, released the Vengeance/In This Town 7" and the Jan's Rooms 7", both of which are long sold out but are being repressed by Touch & Go as a double 7" pack on April 15 (just ahead of, but not part of Record Store Day), limited to 1,000 copies. If you're not familiar with The Fix, you can listen to streams of both 7"s below, and they should appeal to fans of any of the more famous early '80s bands like Black Flag, Minor Threat, etc.

Also below is a trailer video for the reissues and tracklist...

The Fix - Vengeance/In This Town

Vengeance / In This Town
Side A: Vengeance
Side B: In This Town
Jan's Rooms
Side A: Cos The Elite * The Truth Right Now
Side B: Signals In Distress * Off To War