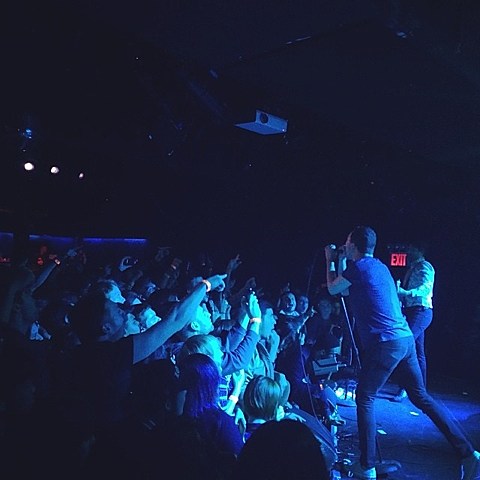 Touche Amore and mewithoutYou brought their co-headlining tour to NYC for a sold out show at Le Poisson Rouge last night (2/26). This leg of the tour (which continues through early March), was opened by Caravels, whose blend of post-rock atmospherics, subtle technical tendencies and a vocalist who shouts more so than screams was an excellent primer for what was to come. The second band, Seahaven, wasn't totally my thing, but still a solid opening set.

mewithoutYou may not be as popular as they once were (the crowd seemed much crazier for Touche Amore), but they're veterans of the sound that bands like TA (and especially La Dispute) are currently doing, and they came off as such last night. As a live band, it feels like they only keep getting better, and their increasingly diverse discography gives them more and more to offer each time. We got "Bullet to Binary," a classic from their post-hardcore era, plus a handful of favorites from their beloved mid-period like "Nice and Blue Pt. 2," "Torches Together" and "A Glass Can Only Spill What It Contains." But the newer material from 2012's unfairly overlooked Ten Stories shines as well, and sounds great mixed with the old.

Touche Amore took the stage after them, opening with the drum-less melancholy of "Praise / Love," and as soon as that song turned into "Anyone / Anything," LPR became a madhouse. Like any good Touche Amore show, the mosh pits hardly ever waned, and you could hear the crowd shouting over Jeremy Bolm at just about any given moment. Ending the show with "Honest Sleep" into "Condolences" gave him a final one-two punch of I-don't-even-need-my-mic songs, and on the other side of that spectrum, adding the post-rock build of "Non Fiction" into the set gave the band a chance to show they can be as powerful instrumentally as they are lyrically. Not a dull moment in their entire 20+ song set.

The Touche Amore/mewithoutYou tour continues for another week, and if you'll be in Austin for SXSW, you can catch Touche at the BrooklynVegan showcase on Wednesday, March 12 at Red 7 with Against Me!, The Front Bottoms, Cheap Girls, Harvey Sid Fisher and more.

Check out Touche Amore and mewithoutYou's setlists from the LPR show, with a video of mwY playing "Bullet to Binary," below...