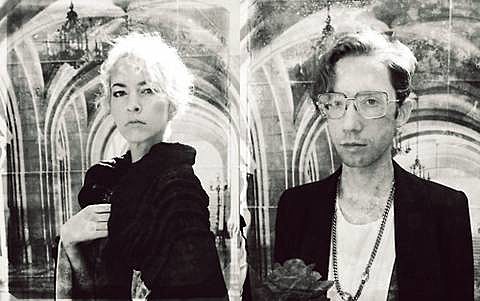 Los Angeles duo Touché is a new musical project from Bram Inscore and Alex Lily, both of whom were in Obi Best if you remember them from a couple years ago. Both have long been part of the LA scene, with Bram playing with Beck, Charlotte Gainsbourg and recently took over bass duties in Twin Shadow after Russ Manning left to concentrate on his project, Rush Midnight (is this a trend?). Alex, meanwhile, sang backup with The Bird and the Bee.

The duo, whose music is shiny electropop with a strong ear for hooks, will release their debut album, It's Fate, next year but the first single, the catchy "I'm a Man Not a Machine," is out now and you can stream it or watch the video below. Also below are some remixes by the likes of Daedelus and Lee Cooper (aka Twin Shadow keyboardist Wynne Bennett).

Touché will be in NYC next month for a show at Glasslands on December 19. No openers have been announced but tickets are on sale now. The duo will then be back in NYC for a show at Cameo on January 4 with Tippy Toes and Future Screens. No advance tickets for that one, just $7 at the door.

All upcoming Touché tour dates are listed below, along with song streams.

Touché - "Everything He Wants"