"Toumani Diabaté (born August 10, 1965) is a Malian kora player who has gained international acclaim for his music. He is considered by many to be the world's finest kora player. He is a versatile performer, being equally at home with the traditional music of Mali as well as with cross-cultural collaborations with flamenco, blues, jazz, and other international styles." [Wikipedia] 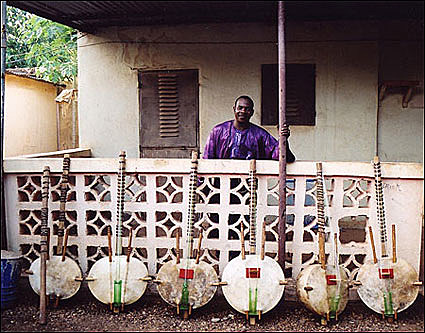 "Toumani has been exceptionally active of late, most recently on his second album with the Symmetric Orchestra in 2006 (“trying to rebuild the Mande Empire in a culture way – not a political way”) and In The Heart Of The Moon (2005), his Grammy-winning duet album with the late Ali Farka Touré. A second instalment from those sessions is slated for release in 2008, preceded by another solo album in 2007." [BBC]

Listen to some of Toumani's music at this Nonesuch streaming player. See Toumani live at one of THREE upcoming NYC events....