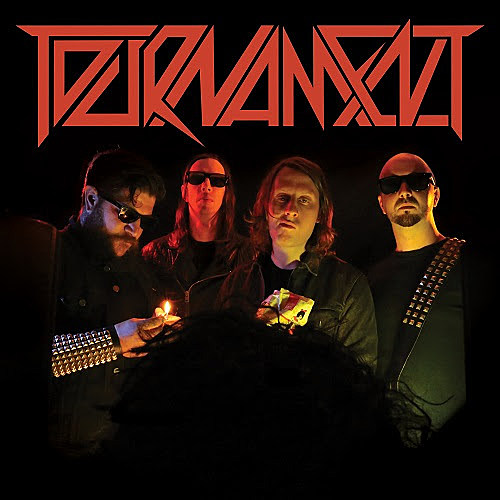 In The End's own entertaining words:

Tournament is a band comprised of four unsatisfied and hard to please jerks -- a once-New York-centric band that has developed itself into a cult sensation. Since 2008, they have released three well-­received recordings and toured the U.S. in the jankiest vans, playing any bar, basement, or D.I.Y. venue they could find. At-home beer drinkers, hell raisers, feebs, and felons are sure to attend a Tournament show. Wherever they are, the band remains eager to please themselves and the aging youth of America with their unapologetic approach to Rock 'n' Roll.

In the years since their last release, the band holed up in their home studio and bolted the door shut. With electrodes affixed to guitars, vacuum tube amps burning up the subterranean atmosphere, the magnetic tape shedding itself all over piles of scrapped songs and meandering experiments, the band emerges, sounding leaner and meaner yet at the same time more fun than ever before.

Say the band, "We are beyond stoked to sign with our friends at The End Records and look forward to sharing this record with fellow rock bros this Spring!"

Recorded in their own studio and co­-engineered by drummer Jordan Lovelace and Kyle Keayes­Hagerman (Destruction Unit, The Men), the resulting sound is that of a band of brothers backed into a corner, and with supernatural strength (or maybe a case of beer muscles), these four are battling through the crowd with bass throbbing, serpentine guitars slithering, and Moto¨rhead­meets­motorik rhythms pounding. With little air left to breathe and no more beer to drink, the door buckled and burst open, and through the splintery haze of debris, a slab of wax flew forth onto the turntable.

According to Tournament's Bandcamp, "Teenage Creature" will be out on March 4th. That's also the title of the album they self-released earlier this year and then pulled down, so we assume it's the same or almost the same as that one. Catch them live at the Acheron on on December 3rd with Pale Angels, Smalltalk (mem Bouncing Souls), Fortunate Ones, and First Exposure.