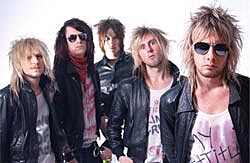 Deciding on what angle to write this review from was a difficult choice. The 13 year old girl in me wants to scream "OMG! TOWERS OF LONDON FREAKIN' ROCK!!!" But the professional rock journalist in me is asking "What the fuck is this? Is this real?" Because I am neither a 13 year old girl, nor am I a professional rock journalist, (as apparent in my love of beginning sentences with conjunctions) this is probably going to sound more like an excited explorer telling a tale of discovering a new land.

The first time I heard Towers of London was a few weeks ago on MySpace. Immediately I could hear the cynics cry."We've already seen this act before. The Darkness, Spinal Tap, Sex Pistols, etc." Of course, if you've read about Towers of London before, then you've heard these comparisons too. However, there are some subtle differences that make Towers of London stand out from the rest. The first thing is.I don't think this is tounge-in-cheek at all. I think these guys are serious. Where The Darkness is more like "Oh yeah, I get it, they sound like Queen.", Towers of London are closer to "Holy shit, now I know what would happen if Poison fucked the Sex Pistols." But they also add the classic punk anthems of Sham 69, and more nihilism than the Pistols ever had. I mean at least the Sex Pistols had some political leanings. Towers' ethos seems to start and end with "DRINK, FIGHT, FUCK." Although none of the bands they get compared to have ever had lyrics as profound as "Fuck it up!" over and over again.

When Towers of London spat out their first song, I was imagining the ways in which they had prepared for this show. My only possible theory is that they must've been locked in a cage and fed nothing but booze for hours before the show. They were threatening, dangerous, and they take themselves seriously. Lead singer Donny Tourette was wearing a shirt with "NYC SUCKS" spray painted on the front, and "ME OFF" on the back. It was incredibly appropriate that in the 2 hours leading up to the bands performance, The Decline of Western Civilization Part 1 & 2 were on the televisions on the wall. Towers of London could have easily climbed right out of the screen and onto the stage like the little creepy girl in The Ring. Bottles were broken, mic stands were kicked into the crowd, microphones were swung into people's faces, and the band climbed up the walls. I could barely understand a word that was coming out of the band member's disgusting mouths. I don't know if it was because the show was loud enough to fill Radio City Music Hall, or if it was because of the slurred cockney accents. Regardless, the show was thrilling to say the least. I absolutely loved it.

So will Towers of London usher in a new wave of "cock punk"? I hope not, because I can't imagine any other band doing it as seriously and as amazingly well as these guys do it. Plus I don't know how well the hipsters will take to the resurgence of gobbing. The Towers seem destined for self-destruction. See them while you can.