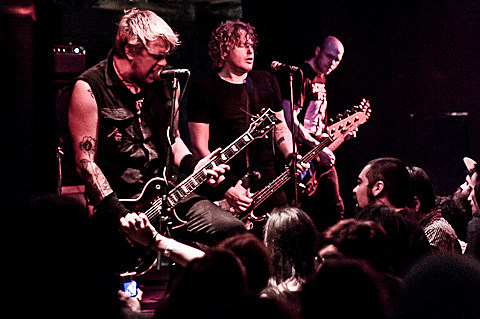 Portland d-beat favorites Tragedy return to NYC with a whallop of a supporting cast in The Boston Strangler, Sickoids and Perdition at Le Poisson Rouge Saturday (5/12). Tickets are still available. The band is touring in support of their new sludge-infested LP Darker Days Ahead out now at their shows and available via a distro near you in the near future. Check out more pictures from their recent Austin show HERE.

In case you were curious, no Portland's Tragedy will NOT be opening for a screening of Saturday Night Fever at Prospect Park on 7/14 but Tragedy, the "all metal tribute to the Bee Gees" will. The full Celebrate Brooklyn Prospect Park concert schedule was announced earlier this week and also includes a Mission of Burma show among many others.

Check out some live video of the Portland Tragedy in action below.