Tragedy at Studio B in 2009 (photo by Konstantin Sergeyev) 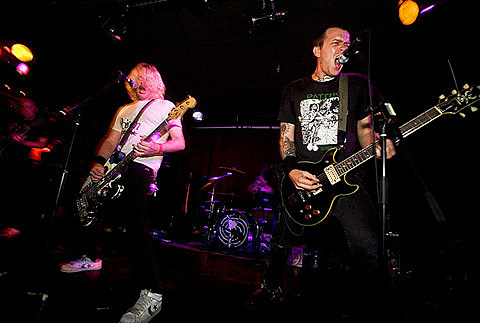 Tragedy will return to NYC, their first show since playing the now-defunct Studio B in 2009, to play Europa on May 31st with the recently reunited Citizens Arrest, Teargas (who also play Europa with Doom/Drop Dead), and Night Birds. Tickets are on sale.

The NYC date is in addition to Tragedy's appearance at Maryland Deathfest, which recently lost Goatsnake & Destroyer 666, and added Ghost & Nunslaughter. Tickets are still available for that too.

Citizens Arrest meanhile is in the studio recording new songs, Ted Leo included. They've been posting videos to prove it (here and here). The Brooklyn gig is their only upcoming show at the moment. They were supposed to be heading to Canada this week, but then they posted this:

"Unfortunately, Citizens Arrest will not be playing in Toronto on March 12 due to circumstances beyond our control. Sincere apologies to our fans in Canada who purchased tickets. We look forward to playing in Toronto and Montreal later this year if possible."

Check out some live Tragedy videos below...