Tragedy at Emo's during Chaos in Tejas (more by Keith Marlowe) 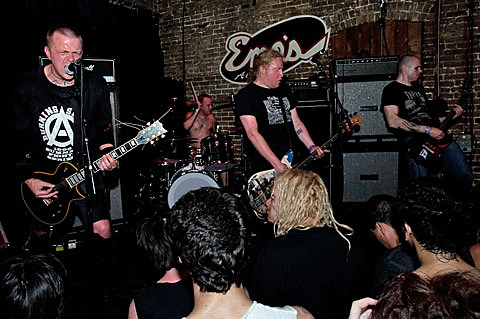 Tragedy will release their new Billy-Anderson-produced LP Darker Days Ahead officially next week, but the band has been dropping copies of the release at shows on their current tour. Look for that release at a merch table near you at the dates below, including the NYC show at Le Poisson Rouge on 5/12 with Boston Strangler, Sickoids and Perdition. Tickets are still available for that one.

Tragedy played the Echoplex in LA last week and you can watch all of their set which includes a fair number of new tunes, below.

Tragedy's Louisville show is with Shaved Women (who play will NYC too), and Coliseum who will be without long-time bassist Mike Pascal who, as discussed on BV Chicago, has left the band.

Speaking of Coliseum, Ryan Patterson (of Coliseum)'s band, Black God, will be hitting the road for a string of tour dates including TWO in NYC, and both on May 26th. The first, a day show, will go down at ABC No Rio while the second, a night show, will be "announced day of show!" No word on exactly what or where that show might be, but stay tuned.

All tour dates, streams, and that Tragedy video, below...

Tragedy at The Echoplex in Los Angeles