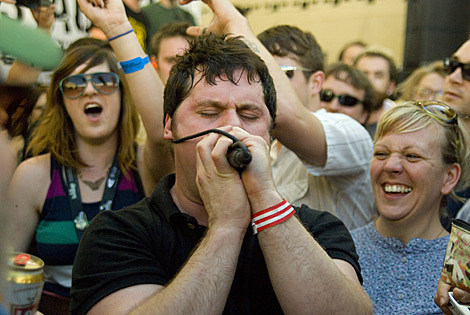 ...And You Will Know Us By The Trail of Dead has scheduled a pair of NYC shows for September 18th and 19th at Webster Hall and Music Hall of Williamsburg respectively, and both with Secret Machines in tow. Tickets go on AMEX presale at noon, with general sale starting on 6/26 at noon (WH here, MHOW here).

These new NYC shows are in addition to ToD's recently-added appearance at the All Points West Festival on August 1st... which is a little weird since you don't often see bands announcing shows when they're playing a local festival. We definitely will have to wait a while before APW headliner Yeah Yeah Yeahs announce another NYC show. Then again St. Vincent and Arctic Monkeys are doing it.

What's more weird though, is that we also have word that Trail of Dead are supposed to play the Williamsburg Waterfront on July 26th with HEALTH and Grupo Fantasma. What's weirdest of all is that we can't confirm that because not even one of the shows happening there this summer have been officially announced yet! (some bands have announced, but JellyNYC still hasn't released anything.)

Trail of Dead recently played NYC in February, logging a pair of shows between MHOW and Bowery Ballroom. Video from the MHOW show, as well as all AYWKUBTTOD tour dates are below...