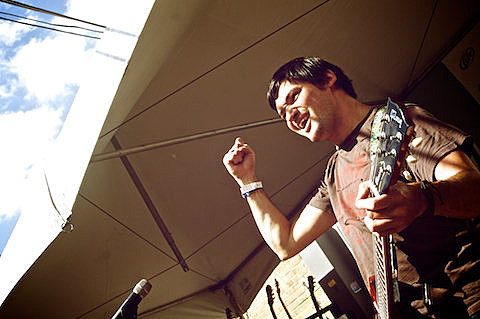 ...And You Will Know Us By The Trail Of Dead have some plans brewing for 2012. A recent Facebook post reads, "Come to think of it, it's been a while since we've debuted a new song...we should probably do that soon," and a slightly less recent one mentions an official tour announcement is coming soon. That announcement still hasn't come but many of the dates have popped up including a NYC show which happens on November 16 at Irving Plaza. Tickets for that show go on sale Friday (8/24) at 10 AM with a Live Nation/Music Geeks presale beginning Thursday (8/23) at 10 AM.

A list of all currently known dates and the video for "Summer Of All Dead Souls" from 2011's Tao of the Dead are below.

...And You Will Know Us By The Trail Of Dead - "Summer Of All Dead Souls"

Filed Under: And You Will Know Us By the Trail of Dead, Trail of Dead
Categories: Music News, tour dates
Comments
Leave A Comment
Back To Top
RELIVE IT: The 2019 Coney Island Mermaid Parade in pics
This Week’s Livestreams (Phoebe Bridgers, The Hives, A$AP Mob, more)
Podcast News: Chris Rock talks to Serch, Gethard does NJ, The Bronx frontma…
36 New Songs Out Today
Built to Spill side project share David Bowie cover from ‘Unoriginal Artist…
19 New Metal & Hardcore Songs Out This Week
Liz Phair features on new cover album from Pete Yorn (listen to “Here Comes…