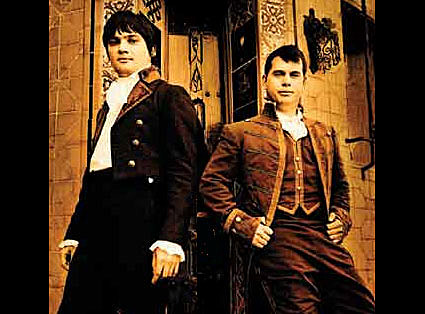 Keely and Reece have been friends since their youth, meeting originally in Hawaii. They each formed their first band in 1993, soon after moving to Olympia, Washington, where Keely studied at The Evergreen State College. Keely started a band called Benedict Gehlen that only lasted a year. Nancyville was Keely's next project, though it also was short-lived. Reece played drums with Honeybucket and then queercore band Mukilteo Fairies while living in Olympia. The two moved to Austin, Texas and started playing as a duo under the moniker, You Will Know Us by the Trail of Dead. The band expanded to include guitarist Kevin Allen and bassist Neil Busch. They then officially lengthened their name to ...And You Will Know Us by the Trail of Dead. Conrad's girlfriend from Olympia, Deanne Rowley (now Deanne McAdams), of Plain Jane, Pro-Ex Marauders, and currently Leopards (and occasionally Dead Air Fresheners), briefly played with them as a back-up guitarist, but never appeared on any recordings. The band is frequently known by abbreviated versions of its name, such as 'Trail of Dead'. [Wikipedia]

"And You Will Know Us By the Trail of Dead return to late-1990s lineup [just the two of them] for one show only w/ Shock Cinema, and DJ Mr. Jonathan Toubin (New York Night Train) at DECLASSIFIED party, Santos' Party House (100 Lafayette, Chinatown, NYC), Monday August 25, 10pm - 4am, $10"