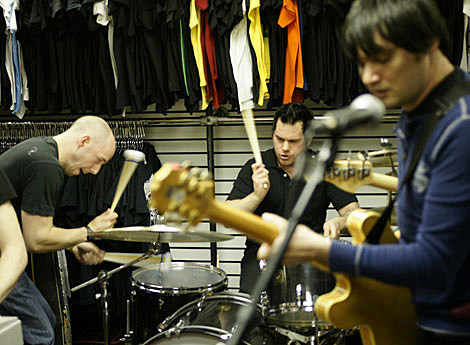 RCRD LBL: So tell me about how you wrote [the song] "Bells Of Creation".

TOD's Conrad Keeley: Well, I wrote it after I saw a band, a friends band. We're friends with the guys from Secret Machines, we've toured with them before, and Ben from Secret Machines left to start his own band called School Of Seven Bells. And the show that I went to see them for the first time was really inspiring and [I was] really into what they were doing.

Where was the show?

I don't think that venue is around anymore, it closed. It was on Ludlow, just off Delancey on the Lower East Side. It was one of those clubs that just closed in the last year, you know a bunch of clubs were bought out by rent. So, I had that kind of sound in my head and I was inspired by that. The association of "Bells" being there, I named the song I was writing, inspired by that show, after a hymn, called "Bells Of Creation" that we used to sing when I was in school back in England. Every morning the school would have assembly, and all the kids would gather in the assembly hall and we'd all sing hymns. And that was one of my favorite hymns, "Bell Of Creation." It was just singular, "The bell of creation."

Trail of Dead have added even more tour dates since last time we spoke, and tickets are finally on sale for both Bowery Ballroom AND Music Hall of Williamsburg.

School of Seven Bells also have a bunch of shows coming up of their own.

On December 17th, Trail of Dead visited WNYC's Soundcheck. You can listen to that HERE. RCRD LBL has "Bells of Creation" for free download. All dates below...