This is not the Beaver Boys. This is Trans AM 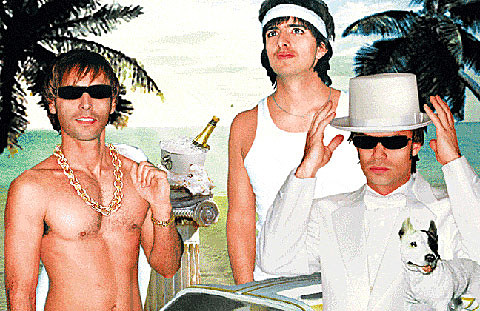 Trans Am go on a two-week tour in late September that kicks off in Philadelphia on 9/27 and concludes with a very special two-night stint at Union Pool on 10/8 and 10/9. The NYC shows are special because on 10/8 the band will perform 1999's Futureworld in its entirety, while 10/9 will feature "a special set". Tickets for 10/8 and 10/9 are on sale. All dates are listed below...

The Futureworld set is to celebrate the reissue of the 1999 LP via Thrill Jockey who are celebrating their own 20th anniversary. Out September 13th on CD & vinyl, the remastered reissue will come with 2 digital bonus tracks. They are "Nazi/Hippie Empire", a studio outtake from the Futureworld session, mixed by James Murphy and "Now You Die, Thriddle Fool!" which was originally released by Strength Magazine on a flexi-disc 7". Check out the title track from Futureworld above/below with all dates...

---
Trans Am - Futureworld by thrilljockey