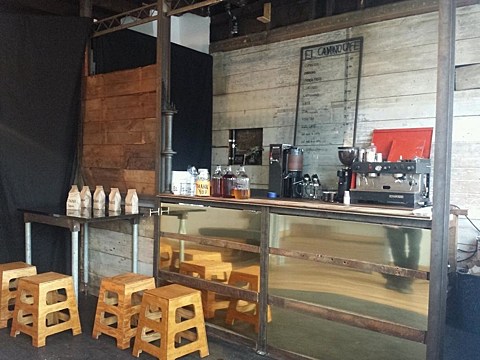 Ridgewood, Queens venue Trans-Pecos (915 Wyckoff Ave) has some updates for the fall, including that they've finally got their liquor license approved, the cafe is open, and the backyard is complete. Here's the details:

GOOD NEWS! Trans-Pecos' full liquor license is in process to be issued by the New York State Liquor Authority, and was recently approved by Queens Community Board 5. In the service of garnering our license, the venue must "go dry" for a period in September, beginning 9/13. During this time Trans-Pecos will refrain from selling alcohol, and cannot allow "BYOB" of any kind of alcoholic beverages. We thank our patrons in advance for cooperating with us in this regard during a handful of 'dry' shows. We will be selling non-alcoholic beverages during this time, including soda, water, and Club Mate, and we will be allowing our patrons to bring in outside non-alcoholic beverages, so long as they are not in alcoholic beverage containers. We our full liquor license to be issued in a matter of weeks, and we will be sending out an update as soon as celebrations are in order - THANKS IN ADVANCE FOR YOUR COOPERATION!

In the mean season, the EL CAMINO cafe is open! Currently the cafe is in "soft opening" status, open most days from noon until 8PM. The cafe will be expanding hours in the near future to include morning commute as well as during nightime events. Ridgewood-ites will be especially excited to gain a high quality, low-key coffee spot serving quality espresso drinks and light cafe fare - with ample seating indoors and out - plus high speed wifi - in the hood! The cafe is operated by Bradford Sill and Colin Crockett of Ft Greene's Red Lantern bike shop & cafe. Come on down.

Finally, the expansive Trans-Pecos back yard, which we have lovingly dubbed 'the urban blight beer garden' is finally complete! Replete with goergeous custom wood tables and stools, patio tiki lighting, and plant life, the Trans-Pecos back yard brings a legit low key spot to enjoy inexpensive libations in East Bushwick/Ridgewood while also taking in the finest off the radar musical offerings to be had in NYC. Get it.

A recent addition to the schedule is Mount Eerie on September 23, the day before he plays Le Poisson Rouge. Those shows are part of a tour where he'll be debuting material off his new album, Sauna, which is due out in 2015. Mecca Normal open both NYC shows.

All Mount Eerie dates are listed, with the full Trans Pecos schedule and more, below...