Trap Them at Saint Vitus in 2013 (more by Fred Pessaro) 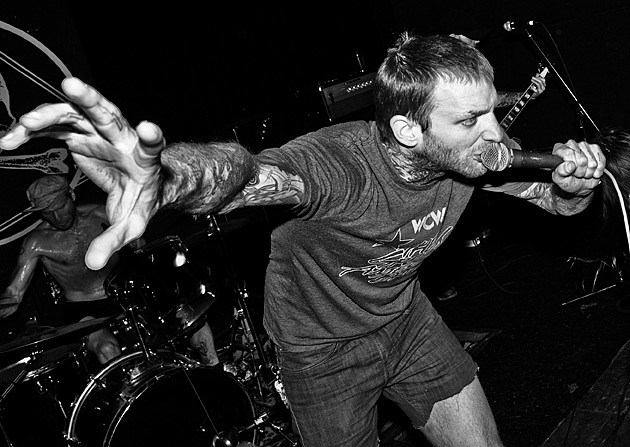 Metallic hardcore crew Trap Them will release their new album, Blissfucker, next week (6/10) via Prosthetic Records, but you can stream the whole thing in full now (via Noisey). As usual, they teamed up with Converge's Kurt Ballou to record this one, and it pretty much sounds like standard Trap Them, which -- in their consistently solid case -- is not a bad thing at all. (Though this is actually their first album to feature new bassist Galen Baudhuin and drummer Brad Fickeisen.) Check it out below.

Trap Them (who used to be on Deathwish) are also touring with post-hardcore bashers Coliseum (who recently joined Deathwish) surrounding both bands' appearances at Cambridge, MA's Deathwish Fest (7/22-23). That tour brings the two bands to NYC for a FREE show at Brooklyn Night Bazaar on July 19 with NYC/LI hardcore band Incendiary and White Widows Pact. That's one day after the Ceremony / Iron Lung tour hits Brooklyn Night Bazaar (7/18), and both shows are presented by Noisey.

Speaking of bands playing Deathwish Fest touring together, Oathbreaker and Cult Leader are doing just that, including a BV-presented NYC show with Deathwish's Young and in the Way.

All Trap Them / Coliseum dates are listed, with the Blissfucker stream, below...