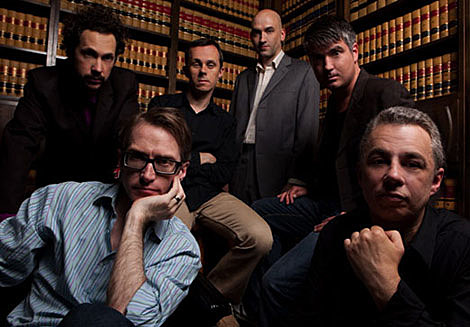 One of Scotland's finest pop bands, The Trashcan Sinatras, are touring North America again -- including a June 11 stop at Bowery Ballroom (tickets) and one the next day at Maxwell's (tickets). The band were last here in August when they'd just released their fifth album, In the Music. As I wrote last year:

Like fellow Glaswegians The Blue Nile, the Trashcan Sinatras take their time between albums -- the brand new In the Music is only the band's fifth. (It should be noted that time between albums is not entirely their doing -- the band have had colossally bad luck with record labels.) The band made the album here in New York with Ivy guitarist Andy Chase behind the boards. Like their other four records, it's loaded with gorgeous songs, arpeggiated guitar lines and swoon-worthy harmonies.

You can download the album's first single, "People," at the top of this post. In the Music has just been re-released in an expanded edition with eight live acoustic tracks. The band also just released a Daytrotter session which sounds pretty sweet.

A few videos and all Trashcan Sinatras 2010 tour dates are below.

Trashcan Sinatras - Only Tounge Can Tell