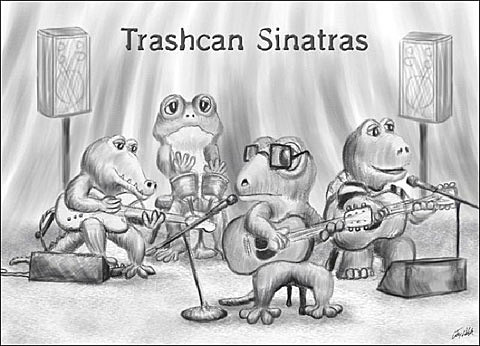 Scottish pop elder statesmen Trashcan Sinatras are coming back to the USA this spring for an acoustic tour, including a March 13 stop at Joe's Pub. The acoustic format suits the Trashcan Sinatras especially well. Does anyone remember the free show they did at the old Sound Fix cafe back in 2005? A truly lovely Saturday afternoon.

Additionally, if there are any songs you'd like to hear them play, the band is taking requests:

during the october 2010 usa acoustic tour, the band accepted fan requests in advance through the website. this was a huge success, with nearly 100 different songs requested during the course of the tour! as a result, the band is once again taking requests, this time for the march tour. as the acoustic lineup features 4 of the original trashcans (frank, john, paul and stephen), the entire trashcan sinatras catalog is potentially available to select from for each show's set list.

For more detailed info, check out TCS' website. Also, do you play trumpet, coronet or flugelhorn?  The band are looking for a few good men. (Or women.) All Trashcan Sinatras tour dates are below.