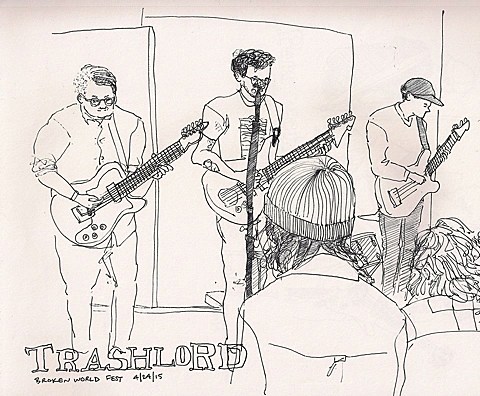 Fans of the whole '90s-style emo revival are probably familiar with I Kill Giants, who are broken up (besides a recent one-off reunion at Broken World Fest), but whose members now play in People Like You, Leaner, Trashlord, Great Grandpa, Boyfrndz, Palehound, Pet Jail and Logfella.

Trashlord is the band of guitarist/vocalist Dylan Hanwright, and it's a departure from IKG, moving more into the world of the shoegaze/alt-rock/post-hardcore thing that's been going on. Trashlord's next release is a split with Boston's slowcore-ish Strange Mangers that comes out this week on Seagreen Records. We've got the premiere of the full stream, which you can listen to below.

If you're in the Boston/Cambridge area, you can catch the release show for the split this Wednesday (10/21), which Spencer Radcliffe and Pinegrove are both playing.