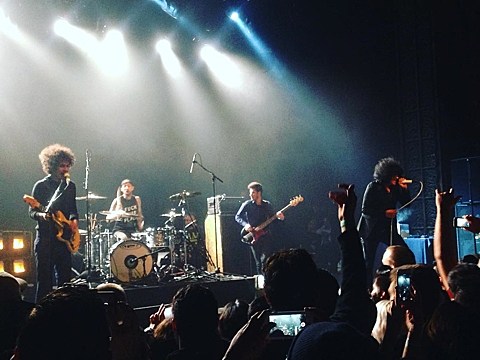 Travis Barker recently joined Antemasque, the current project of Cedric Bixler-Zavala and Omar Rodriguez-Lopez of The Mars Volta and At the Drive In, for the first shows of their current tour (which will soon take them to Fun Fun Fun Fest). The shows, two nights at the Santa Ana Observatory, were the beginning of a more permanent arrangement, as the band announced back in September that he would be playing drums on their upcoming LP. There's footage below of one of the nights, which is about as crazy as you might imagine. (Cedric does manage to keep it together though.) OC Weekly caught the show and here's how they put it:

Barker brought a tight, workmanlike foundation to Antemasque's stage act, along with a huge increase in the average number of tattoos per band member. After opening with "Hanging in the Lurch" from Antemasque's self-titled first album (which ended with Bixler searching for a shoe that slipped off while he flailed around the stage), the frontman introduced the latest addition to their rhythm section. "We just made an album with this cat," Bixler said, before announcing that most of the evening's songs would be new, as-yet-unperformed tracks from that record, tentatively titled "Saddle on the Atom Bomb."

As weird as this marriage might seem, Travis's drumming was always pretty complex for pop punk, and if Antemasque can get Flea in the studio for the new album like they did for the last one, then the new album will be a true supergroup situation.

In other news, Travis' new memoir, Can I Say: Living Large, Cheating Death, and Drums, Drums, Drums, is out now. Noisey recently interviewed him about it, and it reportedly discusses guns, drug addition, the plane crash that almost killed him, and lots and lots of sex. They also deem it to possibly be "the only book in history to have ties to King Diamond, Paul Wall, and Chain of Strength." You can pick it up here.

Travis also recently told NME that he, Mark, and Alkaline Trio's Matt Skiba have five songs recorded for a new blink-182 album. Tom remains up to god knows what. 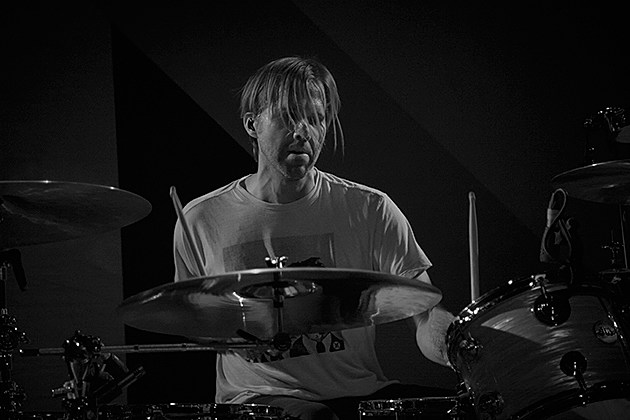 Speaking of SoCal punk drummers, Brooks Wackerman of Bad Religion (who played Travis Barker's festival this year) has left the band after being a member for 15 years. The news comes about a year after longtime guitarist Greg Hetson left too. Brooks' playing (along with Brett Gurewitz rejoining, of course) was no small part of what helped 2002's The Process of Belief breathe new life into the band's 2000s era, the same era we recently caught them celebrating in Brooklyn. Brooks wrote:

Dear boys and girls,
After 15 years, 6 records and countless tours- I've decided to move on from Bad Religion.
This wasn't an easy decision to make after spending a good chunk of my life in such an iconic band, but after reassessing my future in music it was time for me to pursue another path.
As I'm writing this, my mind is flashing back to my audition with these guys in 2000. I'll never forget how exhilarating it was to pay "Stranger than Fiction" (my first song) with them and how well is all jelled, as I was doing my best to camouflage my nerves while walking into Cole Studios in Los Angeles, CA.
To have this education and growth has been invaluable to me, and I'm forever grateful to this band for allowing me to be a part of a movement that I can honestly look back on our time together and say, "I'm proud of what we accomplished."

Brooks' new job is a little less exciting though. You can now catch him behind the kit for, uh, hard rock howlers Avenged Sevenfold.

Check out that Antemasque video, some more pictures, and tour dates below...

Travis Barker checks the sound as he continually amazes. Nothing can or has stopped this man from pushing the Limits of music. Is there a limit? As far I as can see, no. Antemasque, The Observatory NP, San Diego, Calif. Photo By O. @travisbarker @cedric_bixler_zavala_ #antemasque #travisbarker