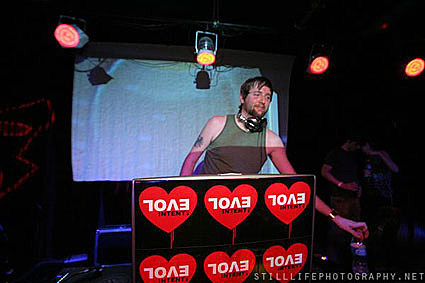 This Friday (2/1) new Fool's Gold signing Treasure Fingers will be DJing at Hugs in Brooklyn. It's free and there will be complimentary Bushmills from 10-11. Big things for this dude in 2008, so get on board early! Treasure Fingers' debut Fool's Gold 12" "Cross The Dancefloor" will be out shortly, backed by some very major remixes. [RCRD LBL]

We couldn't be more excited, and not just because we put the Friday night party together. Please accept the fantastic January Mini Mix MP3 above, as a special warm up gift to us from Treasure Fingers. Kill The Noise's remix of Chromeo's "Call Me Up" can be heard in the mix, and that's up there for separate download too. Kill The Noise plays with Treasure Fingers in Rochester on February 2nd - that's the night after the party in Brooklyn. Chromeo just killed it at two sold out shows here in NYC. Full mini-mix tracklist, more about TF, and all tour dates, below.....

With over 10 years of international DJing experience killing dancefloors from Russia to Australia and everywhere in between, Ashley Jones aka Treasure Fingers is no stranger to rocking parties. A well-versed producer and an accomplished musician, Treasure Fingers has his lustrous hand in multiple genres. He is also part of the drum and bass trio, Evol Intent, who are widely considered the #1 U.S. producers in their respective genre. While most would rest easy on the success of one genre, TF does not sleep. Operating out of his home base of Atlanta, he produces music endlessly in between touring, dabbling in hip hop, idm, downtempo, and more. [says his biol]

Get another recent Treasure Fingers mix at Big Stereo.