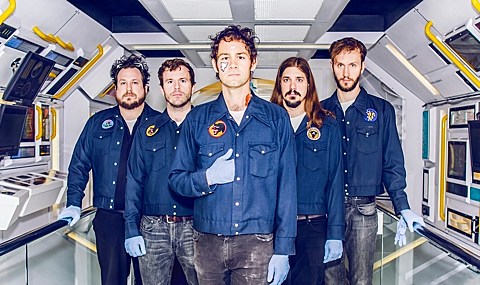 Treasure Fleet, the Chicago band featuring members of The Arrivals, The Lawrence Arms and The Smoking Popes who put their punk spin on '60s mod/psych pop, will release the followup to 2012's Future Ways this year. It's called The Sun Machine and is due on February 10 via Recess Records (pre-order). Its new single "Max Consumption" is most likely named after The Kinks' "Maximum Consumption" (and it quotes some of its lyrics, as well as quoting Harry Nilsson's "Coconut" and Queens of the Stone Age's "Feel Good Hit of the Summer"), but it sounds more like a punked up take on The Village Green Preservation Society. That song premieres in this post and can be listened to below.

The album also functions as the soundtrack to their sci-fi film of the same name, which premiered at London's Raindance Film Festival last year. The film trailer (aka the music video for another track, "The View from Mt Olympus"), also below...