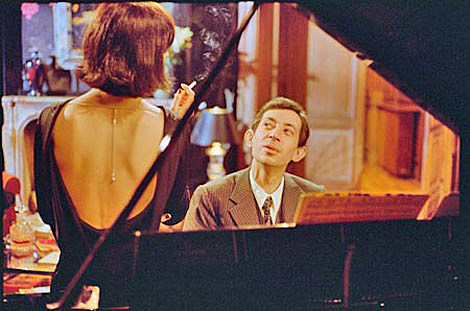 The Tribeca Film Festival runs this year from April 21st to May 2nd, and the offerings include a number of music flicks, many with in-person Q&A's attached. The schedule includes two new biopics Gainsbourg, Je t'Aime... Moi Non Plus and the life of The Blockheads' Ian Dury Sex & Drugs & Rock & Roll. There's also Rush:Beyond the Lighted Stage with members Geddy Lee and Alex Lifeson in attendance, and Last Play at Shea, which focuses on the stadium's history as a music venue and includes footage of Shea's last concert, by Billy Joel, who will be at the screening.

Mars Volta's Omar Rodriguez Lopez directed The Sentimental Engine Slayer which makes its North American premiere at the festival on April 22nd with Omar in attendance. Less than two weeks later Omar headlines a concert at Highline Ballroom. Omar was set to play a NYC show less than two weeks later, but it has been postponed.

Free programs include Tribeca Drive-In movie series from April 22-24 at the World Financial Center, which will screen Big and other films.

Festival packages are on sale now. For individual films, tickets go on AmEx presale starts today at 11am. Then there's a presale for "downtown" residents only (in person, with proof of zip code below Canal St) on Sunday, April 18th. Finally, tickets go on sale to the public Monday, April 19th at 11am. "Tickets for the Festival will be $16.00 for evening and weekend screenings and $8.00 for daytime weekday and late night screenings. TFF will also offer a selection of screenings that include in-depth panel discussions with filmmakers and talent for $25.00."

Info on the above-mentioned films and more, below...

GAINSBOURG, JE T'AIME... MOI NON PLUS (Joann Sfar, France) North American Premeire 4/23
Best-selling comic book artist Joann Sfar delivers a fascinating biography of famed French singer Serge Gainsbourg with his impressive debut Gainsbourg, Je t'Aime... Moi Non Plus. Born Lucien Ginsburg to Russian-Jewish parents, Gainsbourg was lastingly impacted by his childhood in Nazi-occupied France. Sfar gives a glimpse to what is to come by introducing a massive anti-Semitic caricature puppet that chases the young Gainsbourg through the street. From there, Sfar depicts Gainsbourg's rise to fame and his proclivity to drinking and women--including his affair with Brigitte Bardot (perfectly cast Laetitia Casta) and marriage to Jane Birkin (Lucy Gordon).
Creating anything but a basic biopic, Sfar envelopes Gainsbourg's story with a unique and surrealistic style, incorporating such devices as puppets and cartoons to punctuate the incredible life of the man that gave the world songs such as "Bonnie and Clyde" and the scandalous "Je t'aime... moi non plus." Sfar's fantastical elements and sumptuous cinematography by Guillaume Schiffman give an added dimension to Gainsbourg's turbulent life, and Eric Elmosnino's uncanny resemblance and immersive performance may make you forget you're not watching Gainsbourg himself.
**Actor Eric Elmosnino in person.

SEX & DRUGS & ROCK& ROLL (Mat Whitecross, United Kingdom) North American Premiere 4/24
The man who played Gollum and King Kong is now transforming into an equally volatile creature: punk rocker and new wave artist Ian Dury. BAFTA nominee Andy Serkis plays The Blockheads frontman like the circus ringmaster at a carnival of dysfunction (known to the rest of us as the '70s and '80s). This unconventional biopic follows Dury from the days before Catshit Mansions through his rise to quantifiable success. Somewhere along the way, we're introduced to a different Dury: a man whose tenacity allowed him to overcome the debilitating effects of a botched childhood and polio, and who challenged those closest to him to have the same strength of character. He may have been a sonuvabitch, but he gave as much love as he gave grief.
Director Mat Whitecross expertly structures the film as if it were one of Dury's songs, with vivid vignettes and a new wave tempo, while pop artist Peter Blake lends his trademark aesthetic. The story of an artist by an artist, sex & drugs & rock & roll will do more than give you reasons to be cheerful.
**Director Mat Whitecross and actor Andy Serkis in person.

RUSH (Scot McFadyen, Sam Dunn, Canada) World Premiere 4/24
For fans of the legendary Canadian band RUSH, this is the documentary to experience. A comprehensive exploration of the entire history of this extraordinary power trio, from their early days growing up in Toronto, through each of their landmark albums, to the present day. Sit back and revel in the words, music, and wonder of Geddy Lee, Alex Lifeson, and Neal Peart.
With a career spanning four decades, RUSH is one of the most successful bands in the history of popular music, but despite their remarkable career achievements, they have never been recognized as critics' darlings. Directors Scot McFadyen and Sam Dunn instead revel in interviews with the band's admirers and contemporaries, including Gene Simmons (Kiss), Billy Corgan (Smashing Pumpkins), Sebastian Bach (Skid Row), Kirk Hammett (Metallica), Jack Black, and others. Chock-full of rare backstage and concert footage, RUSH: Beyond the Lighted Stage leaves no stone unturned in its creation of an intimate portrait of these immensely talented and iconoclastic musicians.
**Directors Scot McFadyen, Sam Dunn, RUSH members Geddy Lee and Alex Lifeson in person.

LAST PLAY AT SHEA (Paul Crowder and Jon Small (concert footage), US) World Premiere 4/25
From The Beatles' first-ever arena performance in 1965 until Billy Joel's concert before its demolition in 2009, Shea Stadium played host to some of the biggest names in music from around the globe in addition to serving as home to the New York Mets. This lovingly crafted documentary interweaves the history of this recently lost New York City landmark with the career of Long Island native Billy Joel, a performer whose personal connection to the stadium made him the perfect choice to close the curtain on Shea's storied past.
Director Paul Crowder and concert footage director Jon Small draw on a wealth of historical footage as well as personal interviews with Joel to provide an intimate look at the intersecting histories of a stadium, a team, and a music legend. Set to the soundtrack of Joel's final Shea performance and featuring exclusive concert footage with guests like Tony Bennett and Roger Daltrey, Last Play pays a timely tribute to one of America's most significant venues for both music and sports.
**Directors Paul Crowder and Jon Small, singer Billy Joel in person.

THE SENTIMENTAL ENGINE SLAYER (Omar Rodriguez Lopez, Mexico/USA) North American Premiere 4/22
Barlam is a timid, twentysomething grocery bagger lurching clumsily toward manhood in the dusty US-Mexico border town of El Paso, Texas. He's been feeling anxious recently... something about the humdrum of everyday life doesn't fit quite right. His addict sister Nati--equal parts charm and damage--clicks in too well with their borderline incestuous dynamic and gets caught up in Barlam's obsession with a Puerto Rican boy who looks just like him. Thing is, this boy might be the missing piece to their broken family history. Soon Barlam is descending into a seedy underworld where reality and fantasy entangle, masculinity and belonging are thrown into crisis, and flippant humor reveals disillusionment, desire, and rage. And there are some pretty imaginative narcotics, too....
Dripping with sexuality and exuberance in tongues that bounce between Spanish and English, The Sentimental Engine Slayer flickers hot and sweaty with the fluorescent colors of a distinctly Southwest American landscape. This extraterrestrial, semi-autobiographical tale told with boomerang fragmentation and psychedelic sound design gives the director/writer/star Omar Rodriguez Lopez away as the sonic force behind the Grammy-winning fusion rockers The Mars Volta. It also makes Rodriguez's directorial debut a piercingly clear pronouncement that a rare and riveting voice has emerged for independent American cinema.
**Director/actor Omar Rodriguez-Lopez and actors Kim Slode and Sonya Kay in person.

THE OTHER CITY (Susan Koch, US) World Premiere 4/26
Not far from the White House, the Capitol, and the National Mall lies a part of Washington, DC that the tourists never see and the mainstream media virtually ignores. At least three percent of DC is HIV positive, a staggering rate higher than parts of Africa. Behind all the stories of heartbreak, loss, and struggle there are also the incredible, encouraging stories of the people behind grassroots movements to extend education, combat stigmas, and spread hope.
Festival alum Susan Koch's (Kicking It, TFF '08) eye-opening and inspiring documentary tells the unseen and unheard stories behind the epidemic in our nation's capital. From a mother of three who has used her plight with government housing as motivation to campaign for reform, to a former drug addict now advocating for funding of needle exchange programs on Capitol Hill, to the self-described "privileged" young people volunteering at Joseph's House shelter, Koch smartly fixes on the positivity fueling these grassroots movements to remind us that the only unsolvable problems in this country are the ignored ones.
**Director Susan Koch, musician John Legend in person.

STRAIGHT OUTTA LA (Ice Cube, US) World Premiere 4/23
In 1982, Oakland Raiders owner Al Davis moved his team to Los Angeles, where they were welcomed by fans from Compton to Hollywood. Ice Cube was growing up in South Central L.A.--a different world defined by gangs, drugs, and nascent hip-hop. By the middle of the decade, the Raiders were the toast of the town, and Ice Cube's group N.W.A. had taken the music world by storm. Forging an unlikely relationship between music and sports, N.W.A. embraced the Raiders' image, swagger, and style, forever linking the Raiders' heyday in L.A. with the emergence of gangsta rap.
Set to an old-school hip-hop soundtrack, this energetic documentary features interviews with L.A. Raiders legends like Marcus Allen and Howie Long as well as West Coast rap icons including Ice-T and Snoop Dogg. Lifelong Raiders fan Ice Cube also turns the camera on himself to offer a vivid remembrance of a time when the troubled city of Los Angeles found its kindred spirit in an outlaw football team and discovered its voice in the growing rap scene.
***Director Ice Cube in person

MY OWN LOVE SONG (Oliver Dahan, US) World Premiere 4/22
Olivier Dahan broke into the U.S. when his last film, La vie en rose, won two Academy Awards®, and now the writer/director is boldly stretching his talents stateside with his first English-language independent feature. Under Dahan's inspired direction, an unassuming story about an ex-singer blossoms into a whimsical down-home road movie. Jane (played memorably by Renée Zellweger) and Joey (Forest Whitaker) couldn't be more different. All they have in common is solitude and a mildly contentious friendship. She is a hardened wheelchair-bound retired musician, and Joey is an endearing oddball out of step with the daily grind. When Joey learns of a secret that Jane harbors he convinces her to embark on a cross-country trip to Memphis with the hope that she will face her past. On their trip, they stumble upon a bevy of fascinating characters who begin to peel back the layers of Jane's tough exterior.
Zellweger is in top form as Jane, and her singing voice only adds to a powerful and moving performance. Talented cinematographer Matthew Libatique (Requiem for a Dream, Iron Man) beautifully captures a dreamy southern landscape. A heartwarming and magical story of friendship and redemption--with original music by Bob Dylan--My Own Love Song reflects Dahan's vision of an innocence and spirit that is distinctly American.
**Director Olivier Dahan in person.

HARD ROCK HAVANA (Short, Nicholas Brennan, US) World Premiere 4/23
Five government bureaucrats playing in a heavy metal band? It's no joke: It's the story of Cuba's rock scene. Once persecuted for their tattoos and long hair, Cuban rockers now have their shows booked by the Ministry of Culture's Agency of Rock. The most popular of these bands, Zeus, has been playing in Havana for more than two decades. With the majority of the band now in their 40s, questions arise about the band's future.