As that little banner I grabbed off their site says, tickets go on AmEx presale today (4/12) for Tribeca Film Festival movies. To be more exact, starting at 11am, "Single Tickets on sale exclusively for American Express® Cardmembers (Online, Phone, and Ticket Outlets)." Tickets then go on sale to "downtown residents" starting at the same time on Sunday. General public can grab tickets starting Monday, April 18th.

Music-related films this year include Beats, Rhymes & Life: The Travels of A Tribe Called Quest, Mama Africa (about Miriam Makeba), The Ballad of Genesis and Lady Jaye, Crash&Burn, God Bless Ozzy Osbourne, Sing Your Song (about Harry Belafonte who will also be on hand for a conversation moderated by "noted broadcaster" Tavis Smiley), The Swell Season (a documentary about Glen Hansard & Marketa Irglova and their film Once), The Union (about Elton John & Leon Russell), When the Drum is Beating (about Haiti's 20-member band Septentrional), Roadie (about a roadie for Blue Oyster Cult), and Talihina Sky: The Story of Kings of Leon. 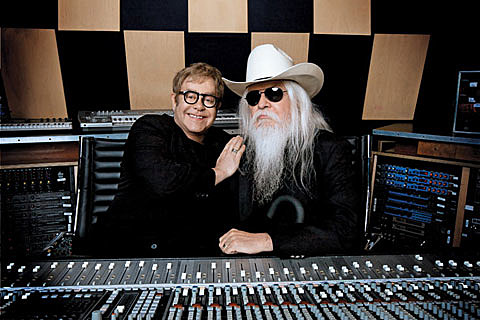 What do these three men have in common? Well, in 2009, Elton John teamed up with his longtime idol Russell to make an album called The Union, produced by the legendary T-Bone Burnett. Director Crowe--himself an avid music fan, having explored the musician's life in such classics as Almost Famous and Singles--decided to film their collaborative process, from writing through recording. The result is a documentary of the same name, the world premiere of which will be shown as the opening night film on Wednesday, April 20, 2011.

"As a longtime fan of both artists, it was a pleasure to spend a year filming their collaboration," said Cameron Crowe. "We can't wait to show it to one of the greatest audiences in the world, the Tribeca Film Festival."

What's more, with this year being the 10th edition of the Festival, opening night will be a free, outdoor screening--as a sincere thank-you to the New York City community for its ongoing support. After the film screens at the North Cove at the World Financial Plaza, the legendary Elton John will perform live for the audience. How cool is that?...

....Details will follow about how YOU can join us on opening night. We can't wait to share The Union with you!" [Tribeca Film Fest]

According to comments on the fest's blog, they're working out a wristband distribution system for the free concert.

Other special events include the Tribeca Drive-In with free films at the World Financial Center Plaza, and the April 30th Family Festival. A clip from "The Union" is below...