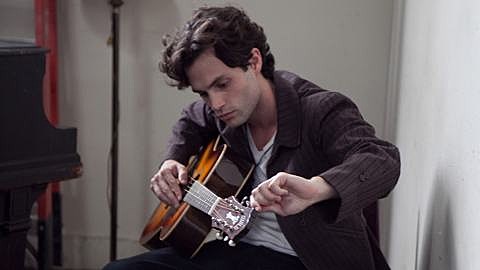 Like usual, there are a few music-related films playing at this year's fest. We already told you about Mistaken for Strangers, in which The National's Matt Berringer invites his brother, Tom, to come along on tour with the band and film them. But it's not your typical tour doc. The film opens the festival on Wednesday (4/17) where The National will also perform and then there are two additional screenings: 4/26 at the Village 7 (8:30 PM, only rush tickets left); and 4/27 at School of Visual Arts (9:30 PM, tickets).

Matt Beringer will also participate at one of the Tribeca Talks panel discussions titled "Music + Film" that happens at the SVA on 4/28 (3:30 PM)  also features Q-Tip and director Todd Haynes, who made the unconventional Dylan biopic, I'm Not There, and the pseudo-Bowie biopic, Velvet Goldmine. Free tickets are available.

Not music-related but one we're more than a little curious about is Lil Bub & Friendz which looks at the internet's obsession with all things cats. There's a free screening of the film on 4/20 (8 PM) at Tribeca Drive-In (Brookfield Place, World Financial Plaza). Additional ticketed screenings happen on 4/18 at the SVA (9:30), as well as 4/23 (6 PM) and 4/25 (3 PM) at the Village 7 (tickets).

There's lots of other films playing too, obviously, and you can peruse Tribeca Film Festival's 2013 line-up here. Trailers for films mentioned in this post are below.