The Hold Steady and The Virgins are playing Webster Hall on May 2nd. Tickets go on sale April 12th. Regina Spektor, Nick Lowe, Sondre Lerche and many others are playing the annual day show at Canal Room (April 29-May 2). This is all part of this year's Tribeca Film Festival which believe it or not includes movies too (Lou Reed's Berlin directed by Julian Schnabel included). The day shows are for festival pass holders only, but I have two pairs of tickets to give away that get you in to the Canal Room for the whole week. How to win, and full festival details/lineups, below..... 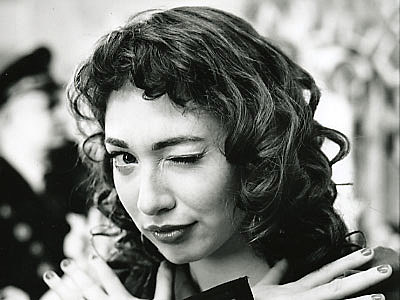 Music Supervisor Alexandra Patsavas returns to curate 'Breaking the Band sponsored by Target'; The Hold Steady, The Virgins, and Republic Tigers to perform

[New York, NY - April 3, 2008] - The Tribeca Film Festival today announced the musical programming for the 2008 Festival. Returning for the 4th year, the Tribeca/ASCAP Music Lounge will feature a variety of live performances by emerging and established artists. Grammy-nominated music supervisor Alexandra Patsavas will return to the Festival to curate Breaking the Band sponsored by Target, an exclusive live music event featuring breakout artists. The 2008 Festival line-up will feature numerous films that showcase music and musicians, including 90 Miles The Documentary, featuring Gloria Estefan, Lou Reed's Berlin, and Celia the Queen, featuring the late Celia Cruz. The Tribeca Film Festival, presented by American Express, runs from April 23 to May 4, 2008.

"Tribeca continues to celebrate the role of music in film, and we look forward to presenting notable artists at this year's Festival," said Nancy Schafer, Co-Executive Director, Tribeca Film Festival and Senior Vice President, Tribeca Enterprises. "The Tribeca/ASCAP Music Lounge and Breaking the Band will provide unique opportunities for musicians and filmmakers to come together in a collaborative environment, and that is where creative ideas are born."


Joseph Arthur, Augustana, Jessie Baylin, Brett Dennen, Jon Foreman, Sondre Lerche, Nick Lowe, Ingrid Michaelson, Jack Savoretti, Sia, Small Mercies, Regina Spektor, Chris Thile, Lizz Wright and Rachael Yamagata are slated to perform as part of the 2008 Tribeca/ASCAP Music Lounge from Tuesday, April 29 through Friday, May 2 at Canal Room. The music lounge is produced by the American Society of Composers, Authors and Publishers (ASCAP), and was created by the Tribeca Film Festival and ASCAP in 2005 to provide a way for filmmakers to interact with composers and songwriters, encouraging collaboration.

Nick Lowe will take time off from his tour promoting the 30th anniversary edition of his seminal album "Jesus of Cool" to kick off this year's Lounge on April 29. The Lounge will feature a variety of performers whose works have been featured in film. During the four days, Regina Spektor (27 Dresses, Definitely, Maybe) will entertain with songs from "Fidelity" to "Us"; Sia (Annapolis, Guess Who) will provide a mix of pop including music from her latest LP "Some People Have Real Problems"; Jon Foreman (A Walk to Remember) will provide acoustic favorites from the band he fronts, "Switchfoot" and new music from his recently released solo EP "Spring"; Joseph Arthur (Hell's Kitchen, The Bone Collector, The Bourne Identity) will perform a variety of released - and many unreleased - songs including sneak peeks from his upcoming album "All You Need Is Nothing"; singer/songwriter Sondre Lerche (Dan In Real Life) will play his signature folk/pop style; singer/songwriter Rachael Yamagata (The Last Kiss, Elizabethtown, In Her Shoes, Prime, Sisterhood of the Traveling Pants) will showcase her piano-driven indie-rock; and Grammy-winning singer/composer/mandolinist Chris Thile (Bluegrass Journey), formerly with Nickel Creek, will perform an acoustic mix from his solo albums as well as his current band, "Punch Brothers."

"In our ongoing effort to highlight the important role of music in film, ASCAP is thrilled to partner once again with the prestigious Tribeca Film Festival to present the Music Lounge," said Music Lounge producer Loretta Muñoz, ASCAP Assistant Vice President - Special Projects. "We share a mutual goal of discovering, exposing and nurturing great talent, and in this, our fourth year of producing the series at the Canal Room, we look forward to providing a unique and beautiful opportunity for the worlds of music and film to connect in an intimate and creative environment."

The Tribeca/ASCAP Music Lounge is located at Canal Room, 285 West Broadway at Canal Street. The Lounge is open to all credentialed Festival badge holders April 29 - May 2 and features four to five artists daily. Doors open at 2:30 p.m. daily with performances beginning at 3:00 p.m. Schedule updates will be posted at www.tribecafilmfestival.org and www.ascap.com.

Patsavas, who has worked on over sixty films and television series, first came to the Festival in 2006 as part of the TRIBECA TALKS program with The O.C. creator Josh Schwartz and enlightened the audience with her insight on the explosion of music on television. Renowned and admired for shaping the musical taste of millions of Americans, Patsavas has introduced a fleet of alternative and indie-rock bands to mainstream audiences through hit television shows such as The O.C., Grey's Anatomy and Gossip Girl. Patsavas curated the Festival's first Breaking the Band showcase that same year with performances by Ben Gibbard, Nada Surf, Ted Leo and the Pharmacists, Mates of State and Matt Pond PA.

"The Tribeca Film Festival has long been a supporter of talented and innovative artists," said Patsavas. "I feel so privileged to be invited back to curate a second showcase, this year at Webster Hall."

Today, Patsavas led the selection of Bad Veins, an unsigned band from Cincinnati as the recipient of the first ever Target Music Maker Award. Bad Veins will be presented the award, an unrestricted cash prize of $10,000 given to an unsigned musician or band, at Breaking the Band on May 2. "With the generous support of Target, Bad Veins might record, mix, tour and certainly explore new opportunities," added Patsavas.

In addition to their support of Breaking the Band, Target will host a private party for filmmakers, music composers, music supervisors and industry representatives at the Festival featuring a performance by Sondre Lerche. Music Spotlight is scheduled for Tuesday, April 29 at the Target-Tribeca Filmmaker Lounge.

A highlight will be Two Timid Souls (Les deux timides), a silent film with French intertitles and live English translation featuring the world premiere of a new score produced by the Film Scoring Program at NYU Steinhardt, with Gillian B. Anderson conducting the NYU Chamber Orchestra in an exclusive live performance at the screening. Discovered last fall at the Pordenone Silent Film Festival, this charming, near-forgotten archival print from the Cinémathèque Française displays all the elegance, wit, and visual inventiveness that are hallmarks of its director René Clair, best known for An Italian Straw Hat, and A nous la liberté.

Additional films that feature musicians and music include:

• Celia the Queen, directed by Joe Cardona and Mario De Varona, written by Cardona. (USA) - World Premiere, Documentary. Azucar! The voice of Celia Cruz, arguably the most influential woman in Cuban music, symbolized the soul of a nation and forced down barriers of racism and sexism. She radiates on screen as her legacy is revisited in this intimate and inspiring documentary. Featuring interviews with Quincy Jones, Andy Garcia, and Wyclef Jean. English, Spanish with English subtitles.

• Lou Reed's Berlin, directed by Julian Schnabel. (USA) - New York Premiere, Documentary. In 2006, artist/filmmaker Julian Schnabel took to the stage at St. Ann's Warehouse in Brooklyn to introduce a concert 33 years in the making: Lou Reed, playing his Berlin song cycle live for the first time. It was worth the wait. A Weinstein Company Release.

• Old Man Bebo, directed by Carlos Carcas. (Spain) - North American Premiere. Nearly 90, Bebo Valdes is one of the greatest living Cuban musicians. This joyful documentary celebrates the man who was a key figure in the development of mambo and whose life reflects the experiences of many Cubans since 1959. Spanish with English subtitles.

• Playing for Change: Peace Through Music, directed by Jonathan Walls and Mark Johnson. (USA) - World Premiere, Documentary. True devotees of music's uniting power, Johnson and Walls hauled recording equipment across four continents, capturing the unsung talents of street performers from Nepal to Argentina. The result is an inspired tribute to both music and the adventurous spirit. English, Spanish, Tibetan, Zulu with English subtitles.

• The 27 Club, directed and written by Erica Dunton. (USA) - World Premiere, Narrative. After the sudden loss of a bandmate, a distressed rock star hires a geeky grocery store clerk to drive him across the country. The vast American landscape--stunningly photographed--provides solace for this unlikely pair as they make their way to New York for the funeral.

A complete list of Festival films can be found at www.tribecafilmfestival.org.

To win a pair of tickets to the Canal Room shows, email BVCONTESTS@HOTMAIL.COM (subject: Tribeca). Include your first and last name. Two winners will be picked and contacted.