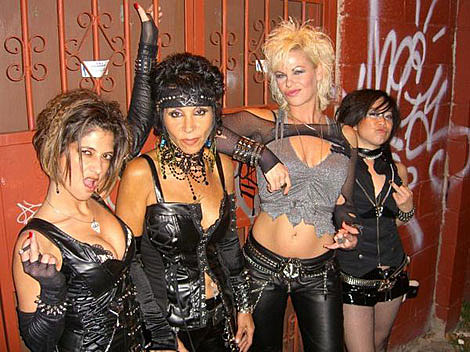 You thought Bowery Presents couldn't announce any more New Years Eve shows. Then you remember they can stay open super late that night which means they can host shows after other shows. Such is the case with the Mr. Brownstone show happening at Mercury Lounge. Doors are 2 AM - after the A Place to Bury Strangers show. The Guns N' Roses cover band will be playing "Appetite For Destruction" in its entirety (or until they pass out). Tickets are on sale.

Mr. Brownstone played Irving Plaza with Satanicide this past Friday, and recently appeared on Letterman. Last New Years Eve they did Music Hall of Williamsburg.

And speaking of cover bands performing entire albums, Pinktallica, an "All Chick Tribute to Metallica", will be performing "Kill Em All" right before Girls Girls Girls (all girls, Motley Crue), will be playing "Shout At The Devil". This all also happens at Mercury Lounge, but on January 17th. Tickets are on sale for that too. I can't find a website for Pinktallica, so I know nothing about them, but they're my favorite band, just based on their name (and their choice of album to cover), in this post.

Last but not least, the extremely popular Beatles cover band, The Fab Faux, has two shows coming up at Terminal 5. On December 26th they perform "Abbey Road" and "Let it Be" (tickets), and on December 27th, "The White Album" (tickets).
More dates at their site.