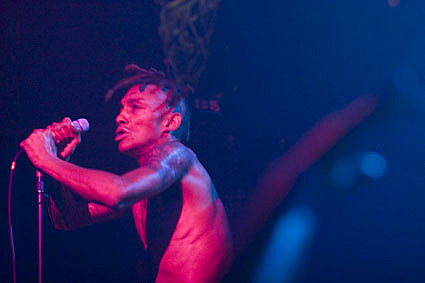 After a September US club tour that ushered his triumphant return to the stage, Tricky announces his most extensive US tour to date. Kicking off in March, the five week coast to coast trek includes a special performance with Devo at SXSW and a featured performance at the Langerado Music Festival. Select dates are on sale now.

To coincide with the tour, a digital "Puppy Toy" single with unreleased b-sides, remixes and videos for "Puppy Toy" and "Council Estate" is set for a March 3rd release.

Tricky will be performing songs from his entire catalog, as well as tracks from the new album. Produced by Tricky, Knowle West Boy is named after the urban ghetto where Tricky was raised. The album finds Tricky reaching into the post-punk, Two-Tone, reggae, hip hop and pure pop he grew up adoring and twisting it all into surreal songscapes, creating the most varied and accessible set of his career. It's no wonder Rolling Stone proclaims the record "his best since 1995 debut Maxinquaye" [PR]

As previously mentioned, tickets are on sale for the March 3rd NYC show at Irving Plaza. Strangely the tour kicks off just one day earlier... at the Crazy Donkey in Farmingdale, NY. All dates below...