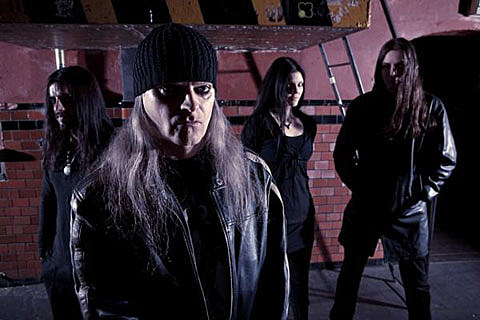 Triptykon's set was one of the most highly-anticipated of the entire fest. Would Tom G. be able to pull it off? As the curtains lifted and the first few notes were struck, my fears were immediately laid to rest. Warrior and his three compatriots tore through new material off their debut Eparistera Daimones like men (and woman!) with something to prove, and whipped the hundreds of longhairs in the audience into a headbanging frenzy by dusting off a handful Celtic Frost chestnuts ("Circle of the Tyrants", "Procreation of the Wicked", "Dethroned Emperor", and more), and bringing out Nocturno Culto (Darkthrone) to do some guest vocals. Here's hoping they make it overseas sometime soon! - Kim Kelly at Roadburn

The full tour routing hasn't been announced, but it looks like the US will get paid a visit from the great Tom Warrior and his new project Triptykon along with 1349 and Yakuza! Those dates include Gramercy Theater on October 8th (!!!) and tickets go on Live Nation presale at 10AM on 7/23, with regular sale 24 hours later.

Triptykon, 1349, and Yakuza have all released new LPs in the past year. Triptykon's year-end-list-topping LP Eparistera Daimones and 1349's Demonoir is out NOW via Century Media. Yakuza's Of Seismic Consequence is out now via Profound Lore. All three LPs are fantastic, with Eparistera Daimones in particular being an absolute must hear.

All known dates, as well as a few videos, are below...

Triptykon - Abyss Within My Soul - Roadburn 2010

Yakuza - Theme from the Black Lodge