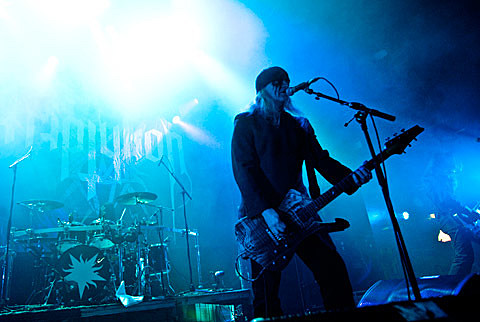 In what's sure to bum a lot of people out, Triptykon have cancelled their appearance at Maryland Deathfest (5/22-5/25). The announcement comes just days before Triptykon was scheduled to play the Rams Head Stage on Thursday (5/22). In a press release, Triptykon (and ex-Celtic Frost/Hellhammer) frontman Tom G. Fischer says he made the tough choice to cancel after the sudden death of his friend and mentor H.R. Giger, the legendary surrealist Swiss artist perhaps best known for his work on the Alien films. Fischer served as an assistant to Giger and his wife for seven years, and Giger made album covers for both Fischer's old band Celtic Frost and Triptykon, includingthis year's insanely heavy stunner Melana Chasmata. He also created art for Carcass, Emerson, Lake & Palmer, Danzig, Dead Kennedys and more.

Last week when Giger died, Fischer issued a press release that began with the following:

For the first time in 74 years, last night was a night not illuminated by the indescribable light that was H.R. Giger.

H.R. Giger became our mentor, against all odds, when we, somewhat audaciously, first established contact with him some 30 years ago. At a time when almost everybody ridiculed, ignored, or even obstructed the music the then almost completely unknown Swiss underground band HELLHAMMER was creating, Giger listened to us, talked to us, and gave us a chance. Not least at a time when he was at one of many peaks of his path.

On Facebook, Maryland Deathfest has said that there will be no replacement band for Triptykon, and that the only potential changes to the schedule might be longer sets for bands willing to play them. Read Fischer's press release below.

The greatest surrealist artist of our time, H.R. Giger, died in a tragic accident on Monday, May 12, 2014. In the wake of Giger's death, his closest friends are gathering to comfort his widow, Carmen, and to assist her in organizing Giger's funeral and his memorial service. I am one of those friends.

We are all still attempting to deal with the shock of this unexpected and extremely painful loss.

For 30 years, H.R. Giger has been my mentor. As I wrote in my eulogy, a few days ago: "At a time when almost everybody ridiculed, ignored, or even obstructed the music the then almost completely unknown Swiss underground band Hellhammer was creating, Giger listened to us, talked to us, and gave us a chance." The result was Celtic Frost's To Mega Therion album which, in turn, was the basis for all subsequent collaborations between us.

In all of his work with Celtic Frost and Triptykon, H.R. Giger was immensely generous, in spite of repeated objections of mine and countless attempts to convince him to accept proper compensation for his amazing contributions.

I have also been an assistant to H.R. Giger and his wife for seven years. I have long seen them as very close friends, even as family. We have experienced many challenging events together, and we have repeatedly taken care of each other in every conceivable manner.

I thus simply cannot and do not wish to fail to attend H.R. Giger's private funeral, and to take part in the subsequent public memorial service, to be held in one of Zurich's largest churches. Moreover, I am an integral part of the group of Giger friends who are currently involved in the difficult task of arranging these events. I cannot possibly just be a recipient. In a moment like this, I have to and wish to give as much as I possibly can.

It is an extremely unfortunate coincidence that these unexpected and tragic proceedings collide with Triptykon's planned appearance at Maryland Deathfest on May 22. We are thus regretfully forced to withdraw from the festival. Within Triptykon, we discussed the possibility of playing the concert without me, with a close friend of ours filling in on guitar and vocals. The other members of the band did not see any merit in performing as an incomplete line-up, however.

Withdrawing from Maryland Deathfest was not an easy decision to take by any means. We are disappointing our audience and the promoter of the festival, it contradicts our sense of commitment, and the band's reputation will suffer damage. We were looking forward immensely to Triptykon's return to the US. After a lengthy and expensive petition process, the US authorities granted us the required US work permits last week. Moreover, a US crew had been hired, and flights and hotels for band and crew had already been booked.

In 1985, during Celtic Frost's very first tour, I was forced to cancel three concerts due to overstrained vocals. I vowed to never let such a thing happen again and took the appropriate steps. Ever since then, I have never again been the reason for a cancellation of a concert by either Celtic Frost or Triptykon. There have been instances, in Paris and London for example, when I went onstage with Celtic Frost in spite of flu and substantial fever, in order to avoid letting down the band's fans.

It is thus utterly against my nature and my own professional demands to be the cause for Triptykon's first cancelled show. But these are truly extraordinary circumstances, caused by the death of a truly extraordinary artist and friend. I hope our audience will understand, and I apologize sincerely. And I am extremely grateful for the incredible understanding and goodwill extended to Triptykon by the promoter of Maryland Deathfest.