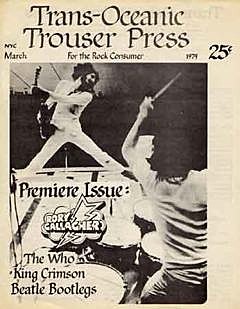 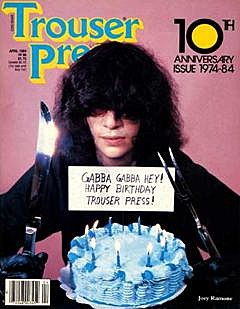 Named after a Bonzo Dog Doo-Dah Band song, The Trouser Press was a fanzine created by Ira Robbins and Dave Schulps in 1974 that began it's life as a "sort of British rock collectors magazine" that, as the decade progressed, became one of the sources for punk, power pop, and new wave. The magazine stopped publication in 1984 but it spawned the very influential Trouser Press Record Guide that was considered by many (this writer included) to be the indie/alt bible of the pre-internet era (it's all archived online and it's still a great resource).

To celebrate the 40th anniversary of it's first publication, Trouser Press will be throwing a party at NYC's Bowery Electric on March 23 with "bands, booze, tunes, stories, and souvenirs." Ira Robbins says it will be a "private party that's open to the public," as much a reunion and celebration of a big anniversary...that also happens to have some bands relevant to what Trouser Press was all about.

To that, performing at Bowery Electric that night will be infamous early-'80s NYC punks Sic F*cks, original Max's/CBGBs era band The Planets (fronted by Binky Philips), and tribute act Pin Ups who used to just perform the Bowie album of their name in full, but have expanded their repertoire to include more '60s-era British invasion rock songs. Robbins says there will be presentations, speakers and other things to go along with the music. No advance tickets, with other details still TBA.

Meanwhile, Trouser Press will also be co-presenting the two-night Brooklyn Power Pop Festival, which happens May 9 & 10 at The Bell House. The 5/9 show is headlined by Dwight Twilley, best-known for his 1975 hit "I'm on Fire" and who went on to make some great, underheard albums in the late '70s/early-'80s. That show also features Pezband who were from Chicago and made terrific Beatle-esqe pop (not unlike Cheap Trick) in the late '70s, plus local up-and-comers 1-800-Band who we recently wrote about.

The 5/10 show is headlined by legendary Chicago quartet Shoes who carried on the Raspberries tradition of pop perfection in three minutes or less in an era when it was definitely out of fashion. Also playing is Paul Collins, who at this point is almost synonymous with powerpop, having fronted The Nerves and the American band The Beat. (He toured with Flamin' Groovies last year.) The night kicks off with Brooklyn's Games who put out their very good debut album on HoZac back in 2012.

Tickets to the Brooklyn Power Pop Fest in both single night options or as a two-night pass, are on sale now.

Trouser Press published 95 issues in its 10-year existence and Robbins is interested in releasing a digital archive of some sort, "though in a way that doesn't involve every waking minute of my life to make." Anybody want to help him out?

Videos/streams of bands playing the Trouser Press events, below...

Lookin for the Magic by Dwight Twilley Band

Pez Band - Baby It's Cold Outside

The Beat (Paul Collins) "Don't Wait Up For Me"

GAMES - (Baby) Put Down That Gun