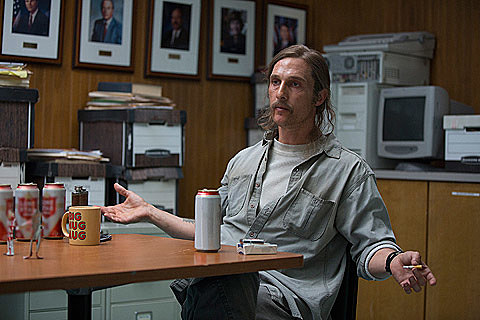 I just wanted an excuse to think about True Detective more as I wait for the 7th episode, so here's a post about the music which includes the show's title sequence theme song "Far From Any Road" by The Handsome Family, and info on the well curated songs in each episode.

Check out what they played in episode 1, episode 2, episode 3, episode 4, episode 5, and episode 6. Names include a lot of country and folk classics mixed with newer indie rock stars, metal, psych rock and more. The Black Angels were in episode one and their tourmate Roky Erickson appeared via his band The 13th Floor Elevators in episode 2. Father John Misty, Lucinda Williams, Vashti Bunyan, Steve Earle, Melvins, Nick Cave's Grinderman, Sleep (!), Primus, Wu-Tang Clan, Omar Rodríguez-López's Bosnian Rainbows, and the Kinks all made the cut so far too. Who is the Yellow King though?

UPDATE: Check out the music from episode 7.

Listen to the Handsome Family intro song below...