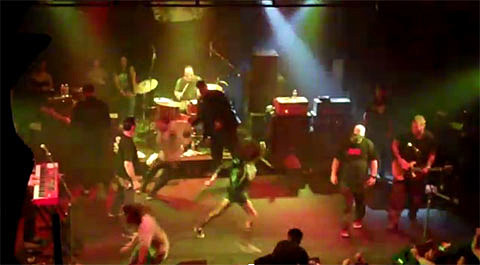 After going through many lineup changes and even replacing their singer, legendary punk band TSOL reformed with their original lineup in 2007 (except for drummer Todd Barnes who passed away in 1999). They've since released Life, Liberty & the Pursuit of Free Downloads for free download (naturally) on Hurley's website, though the link is no longer active. They continue to tour.

The band recently kicked off a tour with Shot Baker. The tour comes through NYC this Sunday (6/12) at Santos Party House. Tickets are still on sale.

Hopefully no riots break out... Laist reported back in January:

"The great TSOL played the Key Club tonight... and in true punk rock fashion... caused a riot and shut down Sunset Blvd. Reminds me of 1982," Tweeted brooklyndom last night.

There were many reports in the media and in social media of helicopters, closed roads, bottles thrown at authorities, and what many consider good old fashioned punk rock pandemonium last night, when a fight escalated into what is being called a riot at the Key Club in West Hollywood. Six people were arrested, and one person was reported injured, according to KTLA, though their identity and condition were not immediately clear.

"The initial fight may have been between a patron and club security," and broke out around 10:30 p.m. said Weho Daily, "but the large crowd turned on deputies and began throwing rocks and bottles." A security guard working for the Sunset Strip Business District "took a bottle to the head," and could be the one injury reported.

Hopefully this one isn't causing the band to deal with any more attorney fees.