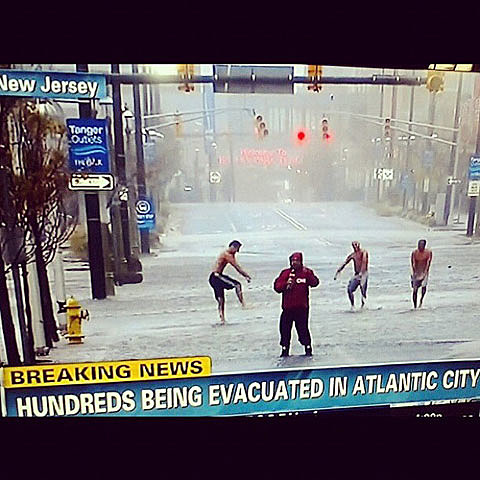 Almost everyting was cancelled on Sunday and Monday, and now Tuesday (10/30) is also shaping up to be a mostly-showless night in NYC (and NJ and elsewhere too).

The Rock Shop in Park Slope is open for drinking. Show is cancelled though.

Public Assembly, who have another Action Bronson show coming up, will be closed Tuesday night.

Dita Von Teese may or may not postpone Tuesday's show, one of four this week. UPDATE: Dita's Tuesday night show is cancelled, and a 2nd Thursday night one was added.

Journey and Pat Benatar/Neil Geraldo at the Barclays Center is cancelled.

The Freedom to Love Concert at Beacon Theater (with tons of artists scheduled to play it including Rufus Wainwright) is postponed (new date TBA).

Le Poisson Rouge also says that Sean Hayes and Behind the Groove events have been canceled but "The Sean Hayes show will be rescheduled. All tickets will be honored."

Everything at 92nd Street Y is cancelled.

All Rocks Off Concert Cruises are cancelled.

All events at BB King's are cancelled.

As of this post, Aimee Mann & Ted Leo's Music Hall of Williamsburg show is still on (their Monday Bowery show was rescheduled for Wednesday), as is the Soft Moon/Pop 1280 show at Bowery Ballroom.

UPDATE: The Soft Moon/Pop 1280 show at Bowery Ballroom is cancelled.

UPDATE: Rita Ora, Iggy Azalea, and Havana Brown at Highline Ballroom "is postponed due to weather complications Rescheduled date will be announced as soon as possible. All tickets will be honored." Rita Ora's Philly show was also cancelled.