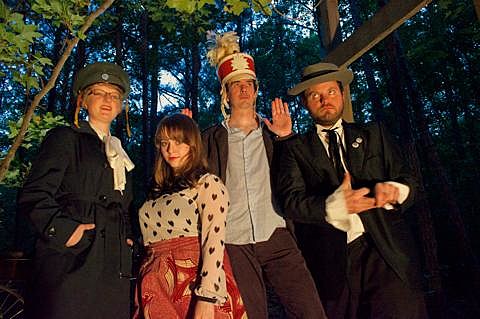 Atlanta's Tunabunny will release their third album, Genius Fatigue, on October 23 via Happy Happy Birthday to Me. Like last year's Minima Moralia (when they also played CMJ), the new LP is loaded with shambolic, angsty pop goodness. You can stream the album's opening cut, "Duchess for Nothing," at the bottom of this post.

The band will be in NYC this week for CMJ, playing the HHBTM/NYC Popfest showcase on Saturday (10/20) at Public Assembly that also features fellow Athens band Eureka California, Seattle's great Orca Team, winsome Brooklynites Chalk and Numbers, Florida's Beach Day, and Bay area duo Bam!Bam!. Tunabunny will also play a record release show in their hometown on October 25 at New Earth Music Hall that also has Bam!Bam!, Eureka California, Orca Team on the bill plus Muuy Biien. Not much else on Tunabunny's tour horizon as grad school and other life things are keeping them in Athens till next spring.

Bam!Bam! are on the East Coast touring with Eureka California, the latter of whom released their debut, Big Cats Can Swim, last month on HHBTM. It's a rager, bashing out 11 garage pop blasts in less than half an hour. If you liked Nude Beach or Paws recent output, give these folks a shot. You can stream "Bite By the Sand" below.

As for Chalk and Numbers, the duo have been busy crossing the I's and dotting the T's on a new EP. They don't play live very often, so don't miss this chance.

Tour dates for Tunabunny and Eureka California are listed below, along with those streams.