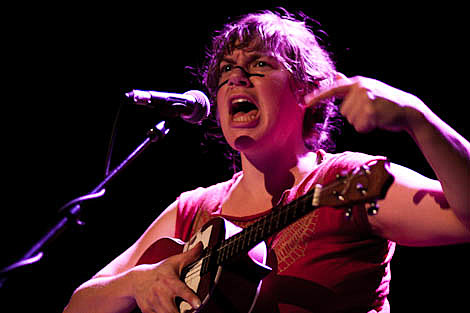 Tune Yards (or tUnE yArDs as its usually written) is the one-woman band of Merrill Garbus. Her debut record BiRd-BrAiNs, previously out on Marriage Record, is being re-released by 4AD, first as a limited-edition screen-printed CD on August 18th, then to wider release later in the year. "Sunlight," a track from that record, is posted above.

As Tune Yards, she tends to perform solo -- she also plays as part of Sister Suvi. Tune Yards will be performing at the Music Hall of Williamsburg on Saturday, September 5th with (opening for) Phosphorescent (also a one-person band, Matthew Houck, though live he usually has company). Tickets go on sale Friday, July 17th at noon.

A track from Phosphorescent's latest, To Willie, is also posted above. Their most recent NYC shows took place in Prospect Park and in Bruar Falls.

Check out a video of Merill at Trophy Bar during the Northside Festival (with Zach Condon of Beirut, a band that Tune Yards has opened for, and who are also on 4AD, in the audience) and all tour dates, below...