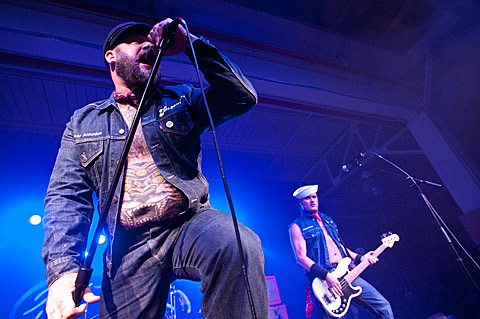 No matter where you fall in the debates regarding their new vocalist, if there's one thing that's certain is that Turbonegro still put on a hell of a live show. So far the Norwegian band has mostly European shows in their calendar, a majority of which are in their home country. But the tongue-in-cheek band will hit the US in late May for a string of dates (including Punk Rock Bowling). While details are still emerging, look for Turbonegro at Irving Plaza on May 18 with guest Dirty Fences.  Tickets go on presale Thursday (2/28) at 10AM, and regular sale the following day (3/1) at 10 Am.

Dirty Fences WILL play another show though and in the near future. Look for the band to be first of four at Saint Vitus on Saturday (3/2) where they'll join the previously discussed Torche, Argonauts, and last night's guests at StV, Iron Reagan. The show is sold out.

All Turbonegro dates are listed, along with video, below.