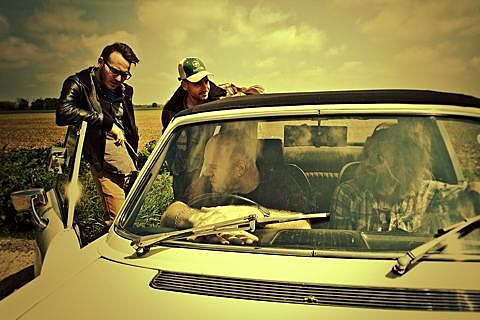 There were a lot of bands who sprung up in the wake of Coldplay's initial success -- Travis, Athlete...um, Starsailor -- and I always thought one of the better ones was London duo Turin Brakes who kept things on the more low-key folky side, only indulging in sweeping anthemicism occasionally. The band's first two albums (2001's The Optimist LP and 2003's Ether Song) are especially good, deftly mixing songrwiting and atmospherics. You may remember "Rain City" from The O.C.

Turin Brakes released their seventh album, We Were Here, last year and it doesn't mess with the formula too much. You can stream it via Rdio. The band are coming to North America next month for SXSW and will be playing shows in NYC (3/10 at Mercury Lounge) before Austin and Los Angeles (3/17 at The Troubadour). Tickets for Mercury Lounge go on sale Friday (2/7) at noon.

All Turin Brakes dates are listed, along with some of their videos, below...