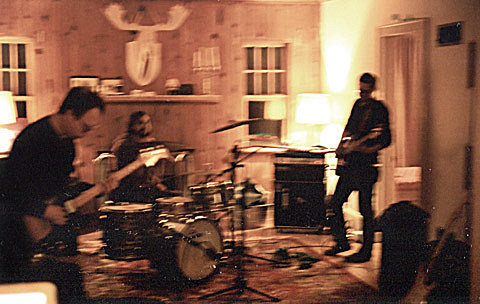 Psychedelic-post-punk-funk favorites Turing Machine are back with their third album What Is The Meaning Of What, the follow-up to 2004's Zwei and first since the tragic passing of drummer Jerry Fuchs

Shortly after Turing Machine began to work on what would become What Is The Meaning Of What, Fuchs tragically passed away. In his absence, guitarist Justin Chearno and bassist Scott DeSimon spent the better part of a year completing the album, with a little help from a plethora of friends, including Disappears vocalist Brian Case, and a host of musicians from the DFA roster, including Andrew Raposo and Caito Sanchez (both of Midnight Magic), Abe Seiferth, DJ McNany, and Pat Mahoney (LCD Soundsystem).

Jerry Fuchs appears on the release (his final recordings), which hits stores on May 8th via Temporary Residence Limited.

Catch Turing Machine in five-piece formation (with Chris Egan of Computer Magic/SpaceCamp/Adam Green/Lightspeed Champion, Dennis McNany of Jee Day/Run Roc, and Abe Seiferth of Tippy Toes and the producer of the newest LP) at a record release show at Union Pool on May 18th where they'll be joined Violent Bullshit. Tickets are on sale.

In related news, Violent Bullshit (current & ex-mems of Les Savy Fav, Panthers, Orchid and more) are preparing to release their new LP Adult Problems and you can order your copy via the band. The band will also play Grand Victory on May 26th.