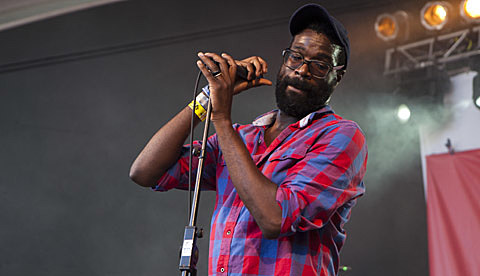 TV on The Radio's new LP Nine Types of Light is officially out on April 12th. The LP comes in various incarnations, including the deluxe version which comes with a companion film for the LP. You can pre-order now, and stream samples of the album below (or in full if you're overseas). Movie trailer down there too.

And naturally, since they have a new album to promote, TV on the Radio kick off a North American tour this week. Tickets are still available for their big April 13th show at Radio City Music Hall with Light Asylum. Tickets go on sale Friday, April 8th at noon for a new TV on the Radio show at the much smaller Music Hall of Williamsburg on April 12th! (there will also be a presale on Wednesday for this release-day show). We have a pair of tickets to the Brooklyn show you can try to win too.

Contest details, all tour dates, the album stream, film trailer and a video, below...

TV On The Radio - Will Do

TO WIN A PAIR OF TV On The Radio @ MHOW tickets: E-mail BVCONTESTS@HOTMAIL.COM. In the subject of the email, write "TVOTR". Include your first and last name in the email. One winner will be chosen at random and contacted. Good luck! (and note: your email will not be used for any evil purposes or shared or anything).