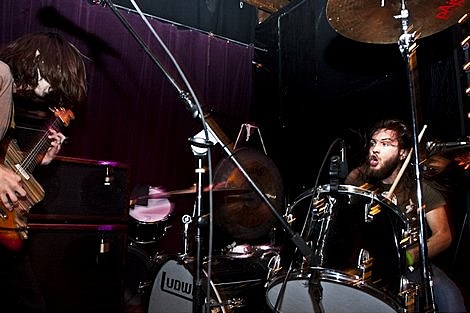 Mondo Generator will team up with Tweak Bird for a show at Santos Party House on August 19th, with support from Violent Soho and The Netherlands. Tickets are on sale.

The NYC show is part of a larger tour for Mondo/Bird, who will rotate in It's Casual on some dates (though not in NYC, where they will be playing with Fu Manchu/Black Tusk).

Mondo Generator is on the road and paying homage to their new Dog Food 7" from a forthcoming album (their fourth) by the band founded by Nick Oliveri (ex-Dwarves, Queens Of The Stone Age, Kyuss). The new single features Dave Grohl, Happy Tom (Turbonegro) and Marc Diamond (The Dwarves) as well. Get yourself one, it's a limited pressing.

Tweak Bird have a joint of their own, their upcoming self-titled LP due on 8/31 via Volcom. Produced by the Deaf Nephews (Dale Crover from the Melvins and Toshi Kasai from Big Business), the album record follows in a similar path to their LA cronies/production team; big drums, big riffs, and hidden pop sweetness. Dig on a pair of tracks from that LP above.

Some video and full tour dates are below...