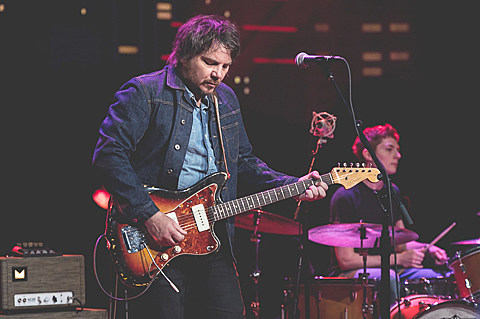 Tweedy's debut album, Sukierae, is out this week and Jeff & Spencer and the rest of the band (including the ladies of Lucius) were on The Colbert Report last night for an interview and live performance. Colbert commented on the Tweedys' "monochromatic denimscape" and asked if Jeff ever had to threaten to pull the tour bus over if Spencer didn't behave. They also played "Low Key" from the album, and also did "World Away" as a web exclusive. You can also watch Tweedy perform "High as Hello" in a tunnel over at NPR.

The same version of Tweedy, complete with the Lucius ladies, will be at BAM's Howard Gilman Opera House tonight (9/23) as part of the Nonesuch Records anniversary celebration. Jeff will do a solo set in addition to playing with Tweedy. There are still a few tickets left but if you're unable to attend the show yourself, BAM is also streaming it live tonight starting at 9 PM. When that goes live you can watch that below as well.