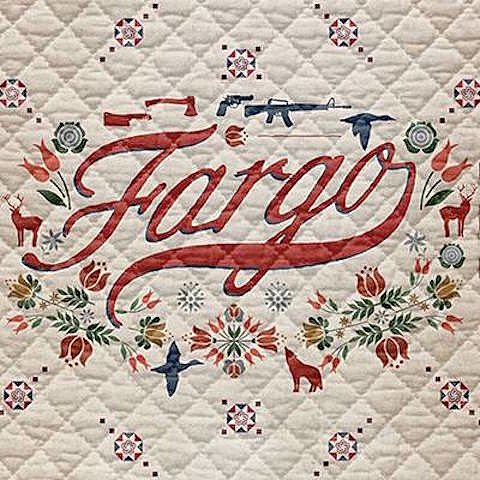 The first season of FX series Fargo, loosely based on the Coen Brothers 1996 film of the same name, defied expectations by being really good. The second season continues to defy, by actually being possibly better than the first -- something True Detective could not pull off. (Final judgement withheld till Monday's season finale.) Season 2 also cleverly draws from the rest of the Coen Brothers universe, incorporating flashes from their other films into Fargo's world, this season set in 1979. It's got a great cast (Patrick Wilson, Ted Danson, Kirsten Dunst, Jesse Plemons, Nick Offerman to name a few), balances humor, tension and very human moments deftly, and is one of the best-looking shows on TV.

The second season also ups the ante with an amazing soundtrack filled with brilliantly chosen, sometimes surprising, songs from the era, but also cover versions of songs used in various Coen Brothers films. The fourth episode uses The Chieftains & Bon Iver's version of "Down in the Willow Garden" (which is woven throughout Raising Arizona), but they've commissioned a number of covers just for the show, including: Blitzen Trapper's great, '70s southern-fried boogie take on "Man of Constant Sorrow" (from O Brother Where Art Thou?); Tweedy doing Jose Felciano's "Let's Find Each Other Tonight" (originally in Fargo); White Denim turn Kenny Rodgers' "Just Dropped In (To See What Condition My Condition Was In)" (used in The Big Lebowski) into cheesy disco; and Spoon's Britt Daniel delivers a fine solo acoustic version of Creedence Clearwater Revival's "Run Through the Jungle" (also Lebowski). It comes off like a Coen Brothers tribute album (for that matter Fargo is at times like a Coen Brothers tribute series).

None of the original recordings of these have been released yet in any official way, and there's been no word on a soundtrack yet, apart from there will be one. But people have been ripping them and putting them on YouTube. Listen to rips of Blitzen Trapper, Britt Daniel, and White Denim's contributions (and that Cheiftains/Bon Iver cover), and check out the soundtrack listing of each episode (courtesy show music supervisor Maggie Phillips' blog), below.

Episode 1
"Oh Well" by Fleetwood Mac (live version from 'Boston')
"Children Of The Sun" by Billy Thorpe
"I Love You" by J.C. Akins
"Didn't Leave Nobody But The Baby" by Noah Hawley & Jeff Russo (original recording by our showrunner and composer, in reference to the Emmylou Harris, Gillian Welch, and T-Bone Burnett version from O Brother Where Art Thou)

Episode 3
"Yama Yama" by Yamasuki
"El Amor Brujo: Danza del Fuego" performed by Katona Twins, composed by Manuel de Falla
"Send Her To Me" by Wayne Chance
"He Made A Woman Out Of Me" by Bobby Gentry
"ymphony No. 1 in D Major, "Titan": II. Blumine" performed by Michael Gielen & SWR Sinfonieorchester Baden­Baden und Freiburg, composed by Gustav Mahler

Episode 5
"Whatcha See Is Whatcha Get" by The Dramatics
"Shambala" by Three Dog NIght
"Let's Find Each Other Tonight" by Tweedy (original recording, in reference to Jose Feliciano's original in Fargo)
"Children of the Sun" by Billy Thorpe (with a score intro by Jeff Russo)

Episode 6
"Mustache In Your Face" by Pretty
"Man of Constant Sorrow" by Blitzen Trapper (original recording, in reference to The Soggy Bottom Boys & Dan Tyminski in O Brother Where Art Thou?)

Episode 9
"Sylvia's Mother" by Dr. Hook & The Medicine Show
"Getting It Back" by Cymande
"Sorcerer" by Junction
"Run Through The Jungle" by Britt Daniel (original recording, in reference to Creedence Clearwater Revival's in The Big Lebowski)