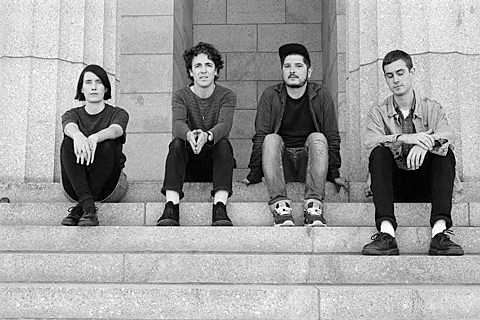 Australian band Twerps signed to Merge this year and released the Underlay EP in late summer. Then last month, they released a new single, "Back to You," which is about as perfect a slice of sunny janglepop as you could want and you can check out the video for that song below. "Back to You" is the first taste of Twerps' new album, Range Anxiety, which will be out January 27. (It's out 1/23 via Chapter Music in their home country.) It's a terrific album and folks who enjoy The Go Betweens, The Bats and The Pastels, Real Estate or just catchy, understated guitar pop, it's definitely an album to keep on your radar. We've got the premiere of the dreamier "Shoulders" which features lead vocals from guitarist Julia McFarlane and you can stream it in this post.

Twerps will be heading to this side of the world in March to play SXSW and will be touring around it. That includes two NYC shows: March 13 at Rough Trade and March 14 at Mercury Lounge. Tickets for those shows will be available via Ticketmaster soon. All dates are listed below.

Drummer Alex McFarlane was also nice enough to give us his Top 10 of 2014 which includes albums, shows and moments. You can peruse that, plus the new song stream, "Back to You" video and a trailer for the new album, below...