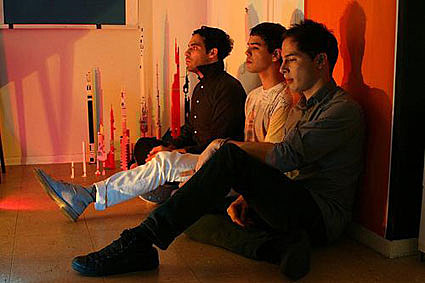 there is legend and rumor of a new interstellar adventurer, by the name of twi, who came to be by the will of an ancient sorcerer forest existing unknown in a nameless galaxy. those aware of this rumor say twi seeks the wisdom of vast green worlds, as well as the sating secrets of sound. inspired by the adventures of this new mythical character, the trio 'twi the humble feather' compose guitar and vocal based music depicting environments recently visited by twi; such as magical castles and forests, and various realms of the uncharted cosmos.

The Burg for Barack - a grassroots fundraising event featuring La Strada, Twi the Humble Feather, and Amber Rubarth. Plus a cupcakes-and-brownies-galore bake sale, and a silent auction including fine apparel, jewelry, yoga classes and spa packages, and more from stylish neighborhood boutiques and stores. 100% of the proceeds go to the Obama campaign. $5 suggested donation at the door.

Brooklyn acoustic guitar-and-voice trio Twi the Humble Feather is coming off a series of opening gigs for Jose Gonzalez earlier this summer and the release of their sci-fi/fantasy concept album "Music for Spaceships & Forests" in June (out on non-label Friendly Ghost Recordings). The FGR site reports that the band is in the process of prepping a new piece for live performance called "Twi Presents the Antek Songs," as well as its second album. Other upcoming shows include opening for Japanese popster Shugo Tokumaru at Mercury Lounge (tix still on sale), a show at Williamsburg DIY gallery/space Paris London West Nile, and a free Wordless Music Series gig at (le) poisson rouge.

Speaking of Obama benefits and (le) poisson rouge, the West Village venue ia hosting a fundraiser of its own on September 10th. Living Colour, The Family Stand, Earl Greyhound, Danielia Cotton, and Viva Mayday are on that bill.

See a video of the Twi guys at Goodbye Blue Monday HERE, and Kyle Grooms's Barack above the tour dates below....