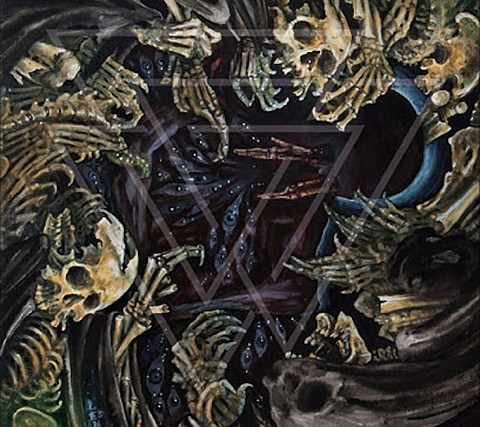 We were pretty confused/excited when indie rock figurehead Thurston Moore joined Chicagoan black metal supergroup Twilight (no, no glittery vampires involved) back in 2012. It's been a long wait since. The rest of their then-lineup went through the wringer, with both Blake Judd (Nachtmystium) and Jef "Wrest" Whitehead (Leviathan) dealing with legal issues and Aaron Turner (ISIS) folding his beloved Hydra Head label.

Twilight finally announced the details for III: Beneath Trident's Tomb, their forthcoming third album (and first with Thurston Moore), today. The bad news is that this album will be their last -- the band has already been "dissolved." Turner and Judd are out of the picture; it's easy to imagine that Judd was booted because of his recent troubles. Wrest has hung on, though, and performs bass, drums, and some vocals on the album. The rest of the lineup is rounded out by Moore (guitar/vox), Neill "Imperial" Jameson (Krieg) on vocals, Stavros Giannopoulos (The Atlas Moth) on guitar and vox, and Chicago sound guy extraordinaire Sanford Parker handling synths and electronics. The album will come out on March 18 via Century Media.

The really noteworthy bit here is the new track the band has posted -- "Lungs," which is both the album's leadoff cut and a total burner. The press release credits Wrest and Imperial with the composition, but man, if that noise-freakout intro isn't a dead ringer for a Sonic Youth part. (I hear shades of "100%" from Dirty.) The rest of the song is a pretty major departure from Twilight's past work, too -- it plows away in grubby, antagonistic noise rock fashion underneath a skein of layered harsh and clean vocals.

Stream "Lungs" and check out III: Beneath Trident's Tomb's track listing below...