Chelsea Light Moving at Maxwell's in 2013 (more by PSquared) 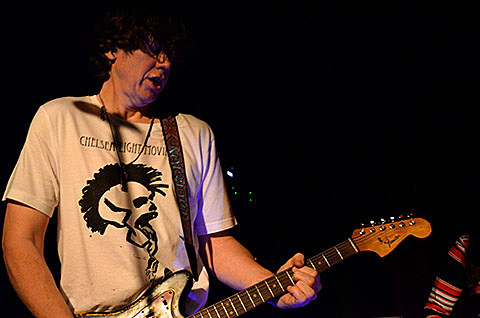 As we mentioned a ways back, the recently defunct Chicago black metal supergroup Twilight -- which features Jef "Wrest" Whitehead (Leviathan), Neill "Imperial" Jameson (Krieg), Stavros Giannopoulos (The Atlas Moth), Sanford Parker, and Thurston Moore (Sonic Youth) (one of these things is not like the others) -- have a posthumous third album, III: Beneath Trident's Tomb, coming out on March 18 (pre-order). Though opinion on the subject is mixed, I consider it easily their strongest and most coherent work to date. It's a shame that they chose this moment to throw in the towel.

We just premiered the second single from the Beneath Trident's Tomb, titled "Swarming Funeral Mass" over on Invisible Oranges. From our writeup:

Moore's presence will undoubtedly skew the narrative around Beneath Trident's Tomb, lightning rod for grumblings about hipster invasions and aging rock douches that he is. But though his contributions merit note (the squealing feedback intro to leadoff single "Lungs" has his prints all over it), he is but one strong personality among several. The real story should be how goddamn good the whole album is. The first two Twilight efforts suffered from classic supergroup syndrome: they were less than the sum of their parts. But the band's final lineup cohered smoothly, if only for this one studio session, into a single beast. It clanks and groans like it's powered by steam, but the pain it feels is very human.

Stream it (and the other Twilight single, "Lungs") below.

Thurston Moore also just released a video for the Chelsea Light Moving tune "Heavenmetal" from their 2013 LP. Oddly, the video bills the song as a Moore solo venture, though SPIN does point out he has a new solo album coming out via Matador this June. Watch the new video below.

Thurston also performed a new song with The Horrors earlier this week, and recently announced dates (none in NYC).

Check out the two Twilight songs and the new Thurston video below...