Twin Shadow at BAM in May (more by David Andrako) 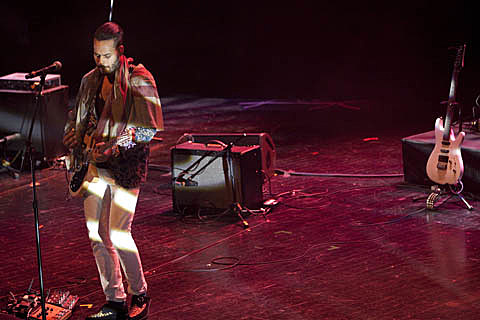 A while back we mentioned that Twin Shadow would be premiering the music video for "Five Seconds" off his new album, Confess (out 7/10 via 4AD), on a Jumbotron in Times Square this Monday (6/18) and performing afterwards. According to a tweet from Twin Shadow, he will no longer be performing in Times Square due to a permit issue but promises that the video will still make its premiere on the Jumbotron.

Meanwhile, you can catch Twin Shadow when his tour with Niki and the Dove hits NYC on Webster Hall on September 27. Tickets for that show are still available.

Niki and the Dove are in NYC this week for Northside. They played a sold out show at Glasslands last night (6/14) (how was that?) and are playing a free show tonight (6/15) at Tribeca Grand. RSVP here.